Under the Skin - by Linda Villarosa (Hardcover) 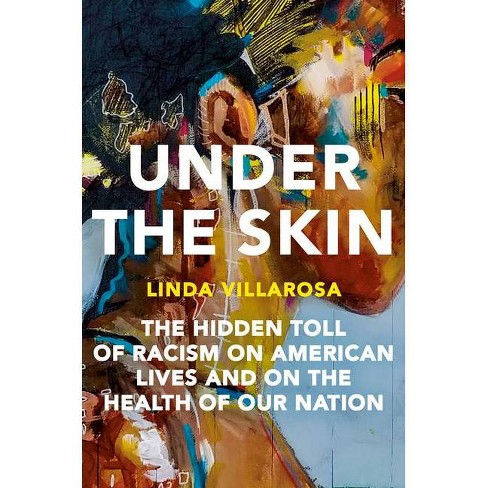 "The first book to tell the full story of race and health in America today, showing the toll racism takes on individuals and the health of our nation, by a groundbreaking journalist at the New York Times Magazine"--

From an award-winning writer at the New York Times Magazine and a contributor to the 1619 Project comes a landmark book that tells the full story of racial health disparities in America, revealing the toll racism takes on individuals and the health of our nation. In 2018, Linda Villarosa's New York Times Magazine article on maternal and infant mortality among black mothers and babies in America caused an awakening. Hundreds of studies had previously established a link between racial discrimination and the health of Black Americans, with little progress toward solutions. But Villarosa's article exposing that a Black woman with a college education is as likely to die or nearly die in childbirth as a white woman with an eighth grade education made racial disparities in health care impossible to ignore. Now, in Under the Skin, Linda Villarosa lays bare the forces in the American health-care system and in American society that cause Black people to "live sicker and die quicker" compared to their white counterparts. Today's medical texts and instruments still carry fallacious slavery-era assumptions that Black bodies are fundamentally different from white bodies. Study after study of medical settings show worse treatment and outcomes for Black patients. Black people live in dirtier, more polluted communities due to environmental racism and neglect from all levels of government. And, most powerfully, Villarosa describes the new understanding that coping with the daily scourge of racism ages Black people prematurely. Anchored by unforgettable human stories and offering incontrovertible proof, Under the Skin is dramatic, tragic, and necessary reading.

Villarosa's empathic and sharp-sighted journalism is as astute as it is groundbreaking, as brilliant as it is timely. Let the conversations begin!
--Jacqueline Woodson, New York Times bestselling author of Red at the Bone "It's no secret that Black people are subject to the cumulative effects of systemic racism. But Linda Villarosa's Under the Skin walks us through the inevitable consequences of living in a racist country on our bodies, our environments, and our healthcare system. The cultural manifestations of the physical and psychological traumas affecting Black People alter or distort all our lives. Those of us who understand that structural violence has physical ramifications will be in debt to Under the Skin. I am grateful for the arrival of this book. It is a relief to have the truth of racialized trauma exposed in such cogent, undeniable writing and with such genius analysis. This is journalism at its finest. If you read one book this year, let it be this one."
--Claudia Rankine, author of Citizen An American Lyric In Under the Skin, Linda Villarosa has written a book that will transform how you understand the relationship between race and medicine, one that makes clear the connection between our history and our health. This is a book filled with indispensable research, but also filled with humanity. Villarosa tells us important stories, and also becomes part of the story herself. I'm so glad this book exists, I will be thinking about it for a long time.
--Clint Smith, New York Times bestselling author of How the Word Is Passed Perhaps one of the most important and thought-provoking publications of the year is Linda Villarosa's groundbreaking Under the Skin: The Hidden Toll of Racism on American Lives and on the Health of our Nation. It's a stunning exposé of why Black people in our society 'live sicker and die quicker'--an eye-opening game changer.
--Oprah Daily Under the Skin makes a powerful case that the systematic assault on Black Americans' bodies is unhealthy for the entire nation. Based on decades of cutting-edge investigative reporting, Villarosa shines a fresh spotlight on this urgent crisis and offers a promising path to health equity.
--Dorothy Roberts, author Killing the Black Body Linda Villarosa, one of our fiercest and most cutting-edge journalists, has given us a classic for the ages. Through engrossing stories of people's real experiences and her signature rigorous reporting, she reveals the biggest picture in American life--that racism has done us all in, and produced a nation so steeped in white supremacy mythology that we cannot take care of ourselves or each other. This book is a gift, a map and a necessity, relevant for every reader who wants to understand their own time.
--Sarah Schulman, author of Let the Record Show "Linda Villarosa's Under the Skin is a compelling and deeply reported examination of racial disparities in health care, cutting through the dangerous, paralyzing, and archaic myths that continue to cloud the vision of medical professionals and policymakers about what is wrong and what needs to change."
--Adam Serwer, New York Times bestselling author of The Cruelty Is the Point Like Covid, Under The Skin is a powerful indictment of how structural inequalities have permeated the quality of health care delivered to people of color in this nation.
--Catherine Coleman Flowers, author of Waste A stunning look at the racial disparities in health outcomes for Black and white Americans . . . Skillfully interweaving historical and medical facts with empathetic profiles of people who have been affected by HIV/AIDS, Covid-19, and other health crises enabled by structural racism, Villarosa delivers a passionate call for equality in the American medical system. The result is an urgent and utterly convincing must-read.
--Publishers Weekly (starred review) This powerful, carefully researched book reveals the significant health challenges faced by Black Americans simply due to being Black . . . Villarosa documents unending examples of social racism, inbred bias, and general neglect, but somehow remains hopeful for change, introducing individuals and programs that are making positive differences. Her thoughtful, personal account raises issues that affect all Americans.
--Booklist (starred review) An eye-opening, heartbreaking study of the racism deeply embedded in U.S. medicine and society; critical for any reader interested in racism's effects on quality of life.
--Library Journal (starrred review) A damning account of how race and racism determine the quality and quantity of medical care in the U.S. . . . A closely argued case for racial and class equity in health care, revealing a medical regime sorely in need for reform.
--Kirkus Reviews

LINDA VILLAROSA is a journalism professor at the City University of New York and a contributing writer at the New York Times Magazine, where she covers the intersection of race and health. She has also served as executive editor at Essence and as a science editor at The New York Times. Her article on maternal and infant mortality was a finalist for a National Magazine Award. She is a contributor to The 1619 Project.
If the item details above aren’t accurate or complete, we want to know about it. Report incorrect product info.