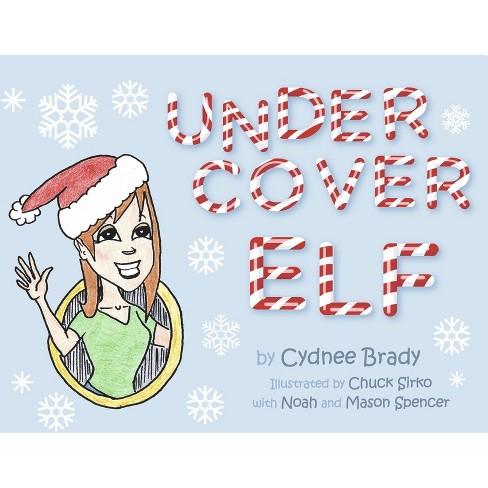 This story is told from the perspective of the son of an Undercover Elf, who discovers his mom's secret job!

The son of an Undercover Elf discovers his mom's secret job and finds out who her boss is. He learns about all the work Elves do to make sure Santa is ready for his ride on Christmas Eve and is happy to show the world how to identify and Undercover Elf out in the everyday world. The magic of Christmas through a child's eyes is one of the greatest joys to watch, and through this tale you and your children will be able to learn more about Santa. Kids can ask some really tough questions about Santa, and as a parent, have you ever been at a loss as to how to answer? Undercover Elf is here to assist with those tricky questions and enhance the excitement of the holiday for you and your child! Keep the magic going throughout the year by trying to find Undercover Elves out and about in the real world!

Cydnee Brady, a true Undercover Elf, began this story many years ago when her daughter was five. Over time, the story grew and took on a life of its own within their home. As the children grew up, they would ask questions about her elf status, and how Santa managed to do all he does before Christmas Eve. With some flair, she was able to answer their questions in a way that added to their excitement and appreciation of Santa's impending arrival. Now that her children have little ones of their own, the story has spread to another generation. It is time to tell the story to a wider audience, and share the magic with others, with Santa's approval, of course! Cydnee is a life-long resident of North Carolina. She and her husband have two children and three grandchildren, and quite a few rescue dogs. When not working, she enjoys cooking, sewing and playing with the kids as much as possible.
If the item details above aren’t accurate or complete, we want to know about it.

Twas the Night Before Christmas - by Clement Clarke Moore