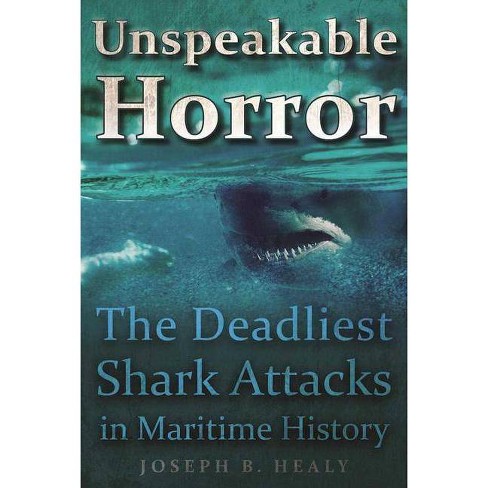 The story of the USS Indianapolis is well-known. After delivering crucial components of the atomic bomb that would level Hiroshima in 1945, the Indianapolis was sunk by a Japanese submarine in the South China Sea. Of the nearly 1,200 men aboard, 900 survived the torpedoing, spilling into the sea. White tip sharks began attacking the next morning and after four days only 300 sailors were alive to rescue. Less famous are the many stories of ships sinking in shark-infested waters with gruesome results. Such as the Cape San Juan, a US troop transport ship that was torpedoed by a Japanese submarine in the Pacific Ocean near the Fiji Islands; nearly 700 of the survivors were killed by sharks. Or the HMS Birkenhead, which sunk off Danger Point, South Africa, in 1852, resulting in 440 shark-related fatalities. In 1927, the luxury Italian cruise liner Principessa Maldafa sank ninety miles off the coast of Albrohos Island while heading to Porto Seguro, Brazil. Nearly 300 who survived the wreck were killed by sharks. In 1909, the French steamer La Seyne collided with British India Steamship Co. liner Onda near Singapore, twenty-six miles from land. One hundred and one people were eventually killed by sharks. In the water, human intelligence is no match for a shark's brutal, destructive instincts. Sharks are born to kill and eat: They detect distress, smell blood--and attack. Marine disasters such as those above result in humans becoming prey, floating in inner space as shadowy sharks swim below, ready to attack. Helpless to save yourself--floating and waiting, watching the malevolent creatures circle, knowing what will happen . . . a sudden swirl of water, a cloud of blood, the searing pain . . . until there is no more. This is unspeakable horror
If the item details above aren’t accurate or complete, we want to know about it. Report incorrect product info.