Until Thy Wrath Be Past - by Åsa Larsson (Paperback) 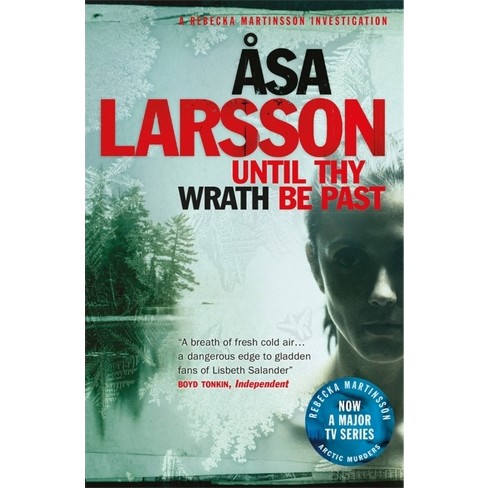 "In a television world now awash in female coppers, there aren't many as interesting and human as Rebecka" Wall Street Journal

In the first thaw of spring the body of a young woman surfaces in the River Torne in the far north of Sweden. Rebecka Martinsson is working as a prosecutor in nearby Kiruna, her sleep troubled by visions of a shadowy, accusing figure. Could the body belong to the girl in her dream? Joining forces with Police Inspector Anna-Maria Mella, Martinsson will need all her courage to face a killer who will kill again to keep the past buried under half a century of silent ice and snow.

In a world awash with female coppers, there aren't many as interesting and human as Rebecka--Wall Street Journal

'Asa Larsson is a markedly different writer, with notably cooler prose, and unlike her multimillion-selling namesake, Stieg ... The novel shows that Larsson is ready to confront unpalatable truths. Among the current batch of Nordic writers, the new Larsson is one to be followed with the most minute attention' Barry Forshaw in Independent.--Independent

'Larsson's laid back style makes her unflinching probing of icy depths of the human heart all the more chilling' Jake Kerridge, The Telegraph.--Telegraph

'Let me get my verdict on this novel out of the way first: brilliant. It has been a long wait for those of us for whom Åsa Larsson's novels strike a deep chord ... thanks to MacLehose Press taking on this talented author ... Until Thy Wrath confirms my view that Åsa Larsson is, along with Johan Theorin, writing today's highest-quality psychological crime novels, particularly strong in their evocation of the local communities, myths and superstitions that are all in danger of dying out in our globalised, homogenised society' Maxine Clarke, Eurocrime.--Eurocrime

'This book was so good! A lot of Swedish crime books carry the comparison of being as good as Henning Mankell and many of them simply aren't. However, I actually thought that this was better than Mankell's books ... Åsa Larsson weaves an extremely intricate plot and we view the actions directly from several different characters ...' Dot Scribbles.--Dot Scribbles

Åsa Larsson was born and grew up in Kiruna, Sweden. She is a qualified lawyer and made her debut in 2003 with The Savage Altar, which was awarded the Swedish Crime Writers' Association prize for best debut novel. Its sequel, The Blood Spilt, was chosen as Best Swedish Crime Novel of 2004, as was The Second Deadly Sin in 2011. Her novels were adapted for television and shown on More 4.

The sixth and final book in the Rebecka Martinsson series, The Sins of Our Fathers, was published in September, 2021. It was later named Best Swedish Crime Novel of the Year, and is the winner of the Adlibris Suspense Award.
If the item details above aren’t accurate or complete, we want to know about it.

A Touch of Jen - by Beth Morgan (Hardcover)

In the Miso Soup - by Ryu Murakami (Paperback)

Now You're One of Us - by Asa Nonami (Paperback)

Waterfowling These Past Fifty Years - by David Hagerbaumer (Hardcover)

Wrath of Acquisition - by Maquel a Jacob (Paperback)

It's Not Even Past - by William Hill (Paperback)