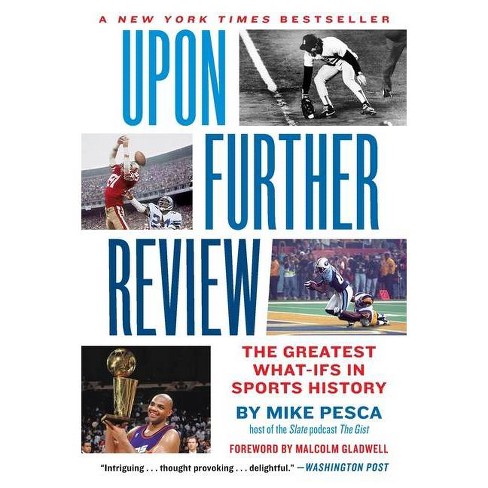 From Mike Pesca, host of the popular Slate podcast The Gist, comes the greatest sports minds imagining how the world would change if a play, trade, injury, or referee's call had just gone the other way. Intriguing...thought provoking...delightful. --The Washington Post
No announcer ever proclaimed: Up Rises Frazier! Havlicek commits the foul, trying to steal the ball! or The Giants Lose the Pennant, The Giants Lose The Pennant! Such moments are indelibly etched upon the mind of every sports fan. Or rather, they would be, had they happened. Sports are notoriously games of inches, and when we conjure the thought of certain athletes - like Bill Buckner or Scott Norwood - we can't help but apply a mental tape measure to the highlight reels of our minds. Players, coaches, and of course fans, obsess on the play when they ask, What if? Upon Further Review is the first book to answer that question.
Upon Further Review is a book of counterfactual sporting scenarios. In its pages the reader will find expertly reported histories, where one small event is flipped on its head, and the resulting ripples are carefully documented, the likes of... What if the U.S. Boycotted Hitler's Olympics? What if Bobby Riggs beat Billie Jean King? What if Bucky Dent popped out at the foot of the Green Monster? What if Drew Bledsoe never got hurt? Upon Further Review takes classic arguments conducted over pints in a pub and places them in the hands of dozens of writers, athletes, and historians. From turning points that every sports fan rues or celebrates, to the forgotten would-be inflection points that defined sports, Upon Further Review answers age old questions, and settles the score, even if the score bounced off the crossbar.

The inevitable plight of sports fans is longing for what might have been. Retrospective analysis -- and wistful reimagining -- is what gets them through the night. UPON FURTHER REVIEW teems with such moonlit fantastical -- and a ravishing counterfactual revelation: sportswriters, the proud and embittered few, are actually a delightful bunch of goofball romantics.--Nicholas Dawidoff, author of The Catcher Was A Spy and Collision Low Crossers

This is sports escapism brought to new and entertaining heights.--Kirkus

What if you didn't read UPON FURTHER REVIEW? You'd miss a lot of mind-blowing fun. But why take the chance? Read it. You'll laugh. You'll learn. You'll impress your friends. There hasn't been a sure winner like this book since Mike Tyson beat Buster Douglas.--Jonathan Eig, author of Ali: A Life and Luckiest Man: The Life and Death of Lou Gehrig

Mike Pesca is the host of the daily podcast The Gist. For ten years he was a reporter for NPR, where he primarily covered sports. He has covered Super Bowls, Final Fours, the World Series, the NBA Finals, the Olympics, the World Cup, the World Series of Poker, and the Westminster Dog Show. In addition to hosting the NPR News quiz Wait, Wait, Don't Tell Me, his work has been featured on This American Life, Radiolab, and Inside the NFL, as well as in Baseball Prospectus and Basketball Prospectus. He is the winner of two Edward R. Murrow awards, one for his coverage of high school football, another for his analysis of the monetary value of Crackerjacks being mentioned in the lyrics to Take Me Out to the Ball Game. He was a two-time winner of the Emory University Intramural Softball Official of the Year.
If the item details above aren’t accurate or complete, we want to know about it. Report incorrect product info.