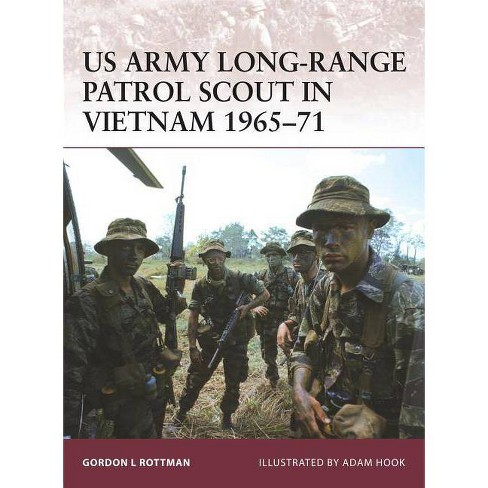 $18.59
MSRP$18.95
no reviews yet
be the first!be the first! ratings
Buy 2 get 1 free on video games, movies and books
Online only •
Shipping
Free standard shipping with RedCard
Loading, please wait...
Help us improve this page

"US Army Long-Range Patrol Scout in Vietnam 1965-71 is a terrific resource for someone interested in the period who is seeking a quick overview and fact check with regard to training, use, uniform variation, equipment, and mission." --Mike Dorn, Wargamer (December 2008)

"This book is another example that shows how well-trained and able to fight our men were in the Vietnam War." --Jeff Grim, Collected Miscellany (January 2009)

"Like most Osprey titles, this one is succinct. Tipping the scale at 64 pages, it isn't long, but is packed with information. Written by a retired Special Forces serviceman who served on LRPs, it is written in a relaxed tone that one might hear when chatting with an uncle over a couple of drinks after a holiday meal. It has a matter of fact tone that's clear, to the point, yet relaxed. The descriptions have a been there feel to them without being tired or boastful. It's the kind of quiet professionalism one finds in heroes who know they've seen some tough spots but don't think of their deeds as 'heroic.'" --The Wargamer.com

"It is a book that should be on the shelf of any serious historian or those who have an interest in this era. One I enjoyed reading and can highly recommend to you." --Scott Van Aken, modelingmadness.com (November 2008)