Valences of the Dialectic - by Fredric Jameson (Paperback) 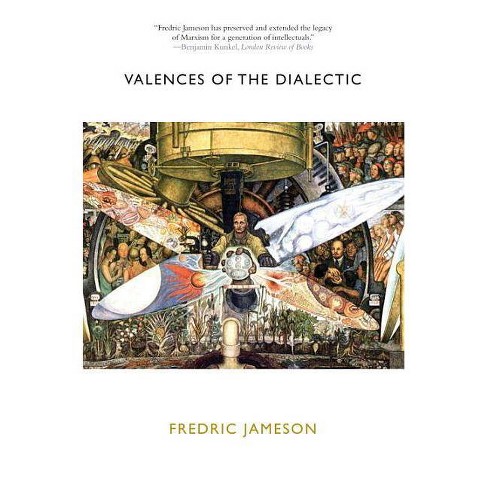 A comprehensive analysis of the philosophy of the dialectic by the doyen of cultural criticism.

After half a century exploring dialectical thought, renowned cultural critic Fredric Jameson presents a comprehensive study of a misunderstood yet vital strain in Western philosophy. The dialectic, the concept of the evolution of an idea through conflicts arising from its inherent contradictions, transformed two centuries of Western philosophy. To Hegel, who dominated nineteenth-century thought, it was a metaphysical system. In the works of Marx, the dialectic became a tool for materialist historical analysis. Jameson brings a theoretical scrutiny to bear on the questions that have arisen in the history of this philosophical tradition, contextualizing the debate in terms of commodification and globalization, and with reference to thinkers such as Rousseau, Lukács, Heidegger, Sartre, Derrida, and Althusser. Through rigorous, erudite examination, Valences of the Dialectic charts a movement toward the innovation of a "spatial" dialectic. Jameson presents a new synthesis of thought that revitalizes dialectical thinking for the twenty-first century.

"A genuinely monumental work that I expect to be referring to for many years."--Mark Fisher, author of Capitalist Realism: Is There No Alternative? "A profound contribution to dialectical thought."--Nicholas Brown, Mediations "Not often in American writing since Henry James can there have been a mind displaying at once such tentativeness and force ... The best of Jameson's work has felt mind-blowing in the way of LSD or mushrooms: here before you is the world you'd always known you were living in, but apprehended as if for the first time in the freshness of its beauty and horror."--Benjamin Kunkel, London Review of Books

Fredric Jameson is Distinguished Professor of Comparative Literature at Duke University. The author of numerous books, he has over the last three decades developed a richly nuanced vision of Western culture's relation to political economy. He was a recipient of the 2008 Holberg International Memorial Prize. He is the author of many books, including Postmodernism, Or, The Cultural Logic of Late Capitalism, The Cultural Turn, A Singular Modernity, The Modernist Papers, Archaeologies of the Future, Brecht and Method, Ideologies of Theory, Valences of the Dialectic, The Hegel Variations and Representing Capital.
If the item details above aren’t accurate or complete, we want to know about it. Report incorrect product info.