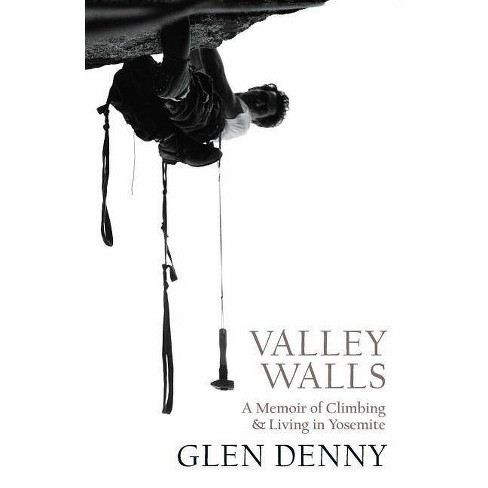 $14.29
MSRP$18.95
no reviews yet
be the first!be the first! ratings
Shipping
Free standard shipping with RedCard
Loading, please wait...
Help us improve this page

WALL STREET JOURNAL, September 2, 2016:
"Oh, to have lived such riches! To have been a peer and partner of legends like Royal Robbins, Warren Harding, Tom Frost, Chuck Pratt, Steve Roper, Layton Kor and Yvon Chouinard! I cracked "Valley Walls" with dread, knowing that to settle in with Mr. Denny's stories would mean surrendering myself to searing envy: I'd rather have made the first ascent of one of the classic El Capitan routes than founded Microsoft. "Valley Walls" isn't a traditional narrative. Each of its 21 chapters tours an alcove of Mr. Denny's memory. Anecdotes of camp life drop between stories of wild vertical adventure, approximately in chronological order. . . . So perhaps it shouldn't come as a surprise that the stories in "Valley Walls" read more like literary snapshots than fully developed dramatic episodes. . . . But despite the lack of connective tissue in "Valley Walls," its anecdotes are vivid and emotionally poignant." ALPINIST, June 10, 2016:
"The memoir richly describes the 1960s era of Yosemite big walls, crack climbs, and Camp 4 culture in twenty-one essays....Denny's tales humanize the climbing icons of the 1960s, portraying them as individuals with goals, dreams, disappointments, triumphs, deaths and sadness. It's a book to tote along on climbing trips, to read while resting in roadside pullouts at Indian Creek or snuggled in a mummy bag in Camp 4." Tommy Caldwell, professional rock climber:
"Glen Denny's photos preserved and romanticized the era now referred to as the Golden Age of American rock climbing. His memoir, Valley Walls, brings those photos to life. A superbly written portrait of larger-than-life characters and go-for-broke ideals brings forth a sense of great envy for a time when purity came from the fact that we did not yet know if these walls could be climbed." Beth Rodden, professional rock climber:
"Glen Denny was part of an age that is iconic to every generation of climbers and epitomizes Yosemite's spirit and soul. His photographs and stories are as famous as the time, and now his book gives us an even deeper glimpse into such an incredible era." Yvon Chouinard, co-founder, Patagonia, Inc.:
Not many of us old guys are left who can remember the history of Yosemite climbing in the sixties. Thankfully, Glen Denny has put together these stories of the great days that were so important. LIBRARY JOURNAL, April 15, 2016:
Denny (Glen Denny: Yosemite in the Sixties) is a well-known photographer who captured the golden age of rock climbing in Yosemite National Park, along with life in the park's Camp 4 campground, during the late 1950s through the 1960s. The author states that this memoir is "based on my notes and photographs and especially my vivid recollections." Essays illustrate daily life at the camp and the Yosemite Valley during this time period, relating Denny's experience being the first to ascend El Capitan's Dihedral Wall, among other routes. Climbing partners, coworkers, and others are remembered with fondness and joy as the author shares stories of various climbs (whether solo, "firsts," or partnered). During these years, Denny climbed with many partners including rock climbers Warren Harding and Royal Robbins. As plastic water bottles hadn't come to market yet, Denny describes hauling water in glass jugs, repurposed bleach bottles, and heavy metal canteens. Readers will also learn climbing terminology such as open book, zipper, flake, and liebacking. VERDICT Climbing newcomers will benefit from the glossary, but the love Denny has for the climbs, climbers, and life during this era make this a must-have for outdoor enthusiasts.
If the item details above aren’t accurate or complete, we want to know about it. Report incorrect product info.