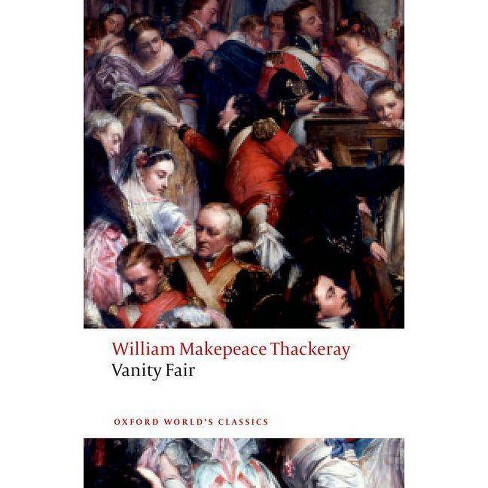 $12.99
0 out of 5 stars with 0 reviews
be the first!be the first! ratings
Shipping
Free standard shipping with RedCard
Help us improve this page

'I think I could be a good woman if I had five thousand a year.' Becky Sharp is sharp, calculating, and determined to succeed. Craving wealth and a position in society, she charms, hoodwinks, manipulates everyone she meets, rising in the world as she attaches herself to a succession of rich men. Becky's fortunes are contrasted with those of her best friend Amelia, who has none of Becky's wit and vitality but whose gentle-heartedness attracts the devotion of the loyal Dobbin. Set during the Napoleonic wars, Vanity Fair follows Becky as she cuts a swathe through Regency society. Thackeray paints a panoramic portrait of the age, with war, money and national identity his great subjects. The battle for social success is as fierce as the battle of Waterloo, and its casualties as stricken. The satire is at once biting and profound, sparing none in a clear-eyed exposure of a world on the make. Thackeray's scepticism of human motives borders on cynicism yet Vanity Fair is among the funniest novels of the Victorian age. This new edition includes all Thackeray's original illustrations. ABOUT THE SERIES:
For over 100 years Oxford World's Classics has made available the widest range of literature from around the globe. Each affordable volume reflects Oxford's commitment to scholarship, providing the most accurate text plus a wealth of other valuable features, including expert introductions by leading authorities, helpful notes to clarify the text, up-to-date bibliographies for further study, and much more.
If the item details above aren’t accurate or complete, we want to know about it. Report incorrect product info.