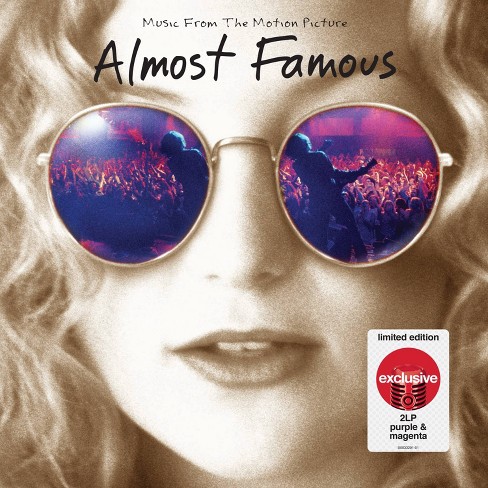 DISC 2 –
1. That's The Way
2. Everybody Knows This Is Nowhere
3. Future Games
4. Tiny Dancer
5. Reelin' In The Years [Live]
6. Waiting For The Man
7. Love Comes And Goes
If the item details above aren’t accurate or complete, we want to know about it.

2 out of 5 stars
Would not recommend
Sadie - 5 months ago
I’m disappointed. I got my first copy and the pink vinyl had a huge black mark on it so I had to take it back. I got another one and it has some weird white sticker right on some of the tracks on the same color pressing. I’m not sure what’s going on but I’m really disappointed in target for this and I’m going to try another one and after that I’m done. Please keep this in mind when you are buying this vinyl.
Did you find this review helpful?

5 out of 5 stars
Would recommend
Spongepants - 8 months ago, Verified purchaser
Great soundtrack specially if you’ve seen the movie.
Did you find this review helpful?

3 out of 5 stars
Majestic - 8 months ago, Verified purchaser
In the movie Almost Famous it has three Led Zeppelin songs. This does not. It has only one. This album is OK but I only liked two songs and that was Tiny Dancer and That's the Way. Maybe it will grow on me. As far as playing and the pretty vinyl color that is aces.
Did you find this review helpful?

Both albums are a little warped but still sounds great

5 out of 5 stars
Would recommend
cheyanne3 - 1 year ago, Verified purchaser
First album got lost in shipping but when I received this it’s fantastic. Love the soundtrack very much. Both vinyl LPs are a bit warped but not bad enough not to play and sound well.
Did you find this review helpful?

5 out of 5 stars
Would recommend
Vannt - 1 year ago, Verified purchaser
It’s must have from a great movie and soundtrack.My brother loved it.
1 guest found this review helpful. Did you?

Great Soundtrack But Not the Original Track Listing

4 out of 5 stars
Would recommend
MeatWizard - 1 year ago
A motion picture soundtrack, when done properly, should transport you right back to the movie. It should be a perfect mixtape flowing from one song to the next seamlessly. Almost Famous is a near perfect movie and the soundtrack reflects that perfection. Having said that be aware - the track list on this “deluxe edition” version differs from the original release. Several songs from the original are omitted and a couple are added in. Additionally there are a few tracks listed as “previously unreleased” “Almost Famous” versions which are really just the original song with movie dialog dubbed over. Compare this album’s track list with the original to see the differences. This really doesn’t amount to a bad purchase, and it’s still a fantastic album, but it is different and not exactly what I thought I’d be getting.
4 guests found this review helpful. Did you?

5 out of 5 stars
Would recommend
doulv2bex - 1 year ago
quite possibly one of the best soundtracks for a movie
1 guest found this review helpful. Did you?

5 out of 5 stars
Would recommend
Lana marie - 1 year ago
It’s sounds great, has really good songs and it’s my favorite movie so I impulsively bought it and the pink and purple vinyls are so pretty
5 guests found this review helpful. Did you?