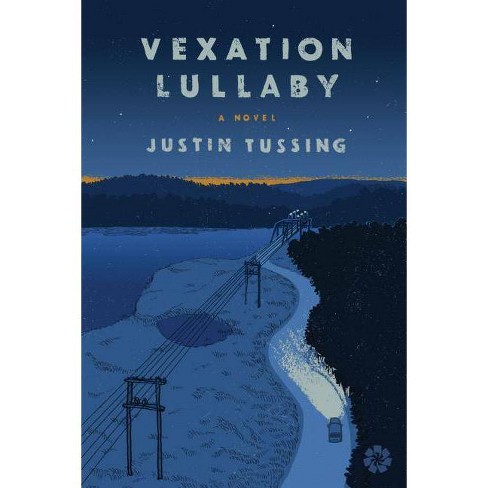 $12.19
MSRP$16.95
no reviews yet
be the first!be the first! ratings
Shipping
Free standard shipping with RedCard
Loading, please wait...
Help us improve this page

Vexation Lullaby (2016) An Amazon Editorial Best Book of April (Fiction and Literature) "If rock celebrities are projections of their fans' fears and desires, then what Justin Tussing has done in his second novel--about an enigmatic old-timer who bears traces of Dylan and Springsteen--is turn the projector around. With a perfect ear and dry tongue, Tussing nails the ragged star Jimmy Cross and his populist poetry, but his central subjects are two men who become entangled with his never-ending tour. . . . Their stories converge with a sweetness that feels earned." --Boris Kachka, NYMag.com's Vulture, "8 Books You Need to Read This April" "Justin Tussing's second novel is a clever, satisfying story about the struggle to find meaning in the lives we've made for ourselves. . . . Tussing uses startling and memorable details to punctuate scenes with a cinematic flourish, and he is particularly adept at using dialogue to reveal how much we actually aren't saying to each other. And the ending is dazzling." --Publishers Weekly (starred review) "Tender, acerbic and carefully observed. . . . As its title suggests, Vexation Lullaby can be both prickly and soothing. Its graceful language, sharp character work and open heart bring home life on the road and leaves the reader satisfied with the trip." --Michael Berry, Portland Press Herald "It's precisely [the] role musicians play in defining and preserving who we are that receives the attention in Justin Tussing's inviting second novel, Vexation Lullaby. . . . Cue road trips and rabble rousing, which Tussing lovingly captures with much attention-to-detail. . . . In one memorable paragraph, he runs through a whole lexicon of terms for musical paraphernalia. . . . A novel that reminds us that looking to celebrities and mass culture for the answers to the all-important questions of who we are will, in the end, only ever lead us astray. Still, we can always look to Justin Tussing." --Simon Chandler, Electric Literature "Tussing is less interested in writing a rock novel than a road novel--that is, a story about how the highway is a path to finding your home... Tussing delivers [Vexation Lullaby] with wit and speed, and he recognizes that what's most interesting about stardom is what takes place offstage. An offbeat novel that's savvy about both music and emotional insecurity." --Kirkus Reviews "Justin Tussing's Vexation Lullaby is a beautifully written rock novel, filled with poignancy and wit." --Largehearted Boy "Justin Tussing rocks the rock novel. Vexation Lullaby is a major literary stunner and pure raw pleasure from start to finish." --Lily King, author of Euphoria "Rock and roll can save your life in this electric novel, and it does--just not in any way you'd expect. Vital as a bass line, soaring as a guitar riff, Vexation Lullaby will have you holding up your lighter for more." --Stacey D'Erasmo, author of Wonderland "Vexation Lullaby is as brilliant, wry, and irresistible as the enigmatic musical genius at its ever-shifting center. Justin Tussing's aim is true, and his beautifully fleet language goes right to the heart of the profound, nameless yearning that sends his characters into the voluntary exile of life on the road." --Sarah Shun-lien Bynum, author of Ms. Hempel Chronicles and Madeleine is Sleeping "A mesmerizing book--terrifically fast, funny, and snapping with original observation on every page. In Vexation Lullaby, superstardom is a curse, but fandom--throwing yourself shamelessly at the artist you love--becomes an act of sacred lunacy. The writing is so good in this novel you want to read it aloud for Tussing's music."--Salvatore Scibona, author of the National Book Award Finalist, The End The Best People in the World (2006)
"One bright book of exuberant American life . . . .An amped, kinetic performance . . . .Tussing has a real gift."--Dan Chiasson, New York Times Book Review "A significant literary feat. . . .Tussing is a master at describing emotion--and elevating it--in the most mundane of situations."--Jessica Treadway, Boston Globe "Stunning, beautiful. . . .It is very rare to find a novel so lovingly, deliberately, perfectly written that you want to read passages out loud to anyone who will listen, but this is that book . . . .At turns, Tussing's writing reminded me of Marilynne Robinson and W.H. Auden, as much in rhythm and beauty as in mood. I cried when I finished this book. Actually, I sobbed. . . .Read it: Now. Justin Tussing's book could be the best debut of the year."--Hillary Frey, Salon.com "A lovely novel . . . . Tussing is a witty, affecting writer with a melancholy streak and a determination not to give too much away."--Ron Charles, Washington Post Book World "Written with insight and imagination that makes every page seem to shine, bringing words and their meanings and metaphors into brilliant, startling relief."--Kirsty Gunn, The Guardian (UK) "Tussing orchestrates a madness-inducing isolation of the three characters that is both believable and chilling, and brings a sense of meaning to the novel as a whole."--Cherie Parker, Minneapolis Star-Tribune "A rewarding read. . . .Justin Tussing's novel is witty, well paced, and inventive. . . .He writes beautifully."--Christina McCarroll, Christian Science Monitor "Bleakly beautiful. . . .Tussing skillfully crafts simultaneously visionary and demented characters"--Publishers Weekly (starred review) "This novel is rich in character, and it offers scene after scene of crackling, revelatory dialogue among lovers and friends . . . .Justin Tussing has delivered a tale properly rooted in flawed and loving characters. . . .A fine book."--Alyson Hagy, Chicago Tribune "Justin Tussing is the real thing. It doesn't happen that often."--Ron Hansen, author of Mariette in Ecstasy "A self-assured debut that lovingly depicts how the past never stops revisiting us. Every episode is rich in painstaking detail."--Oregonian "A richly complicated and very wonderful novel. . . .Ambitious and mesmerizing."--Nina Mehta, Newsday "Defies categorization. . . .The twists and turns are never predictable, and the open-ended denouement will leave readers wanting more of this trio of unlikely characters."--Pittsburgh Tribune-Review
If the item details above aren’t accurate or complete, we want to know about it. Report incorrect product info.