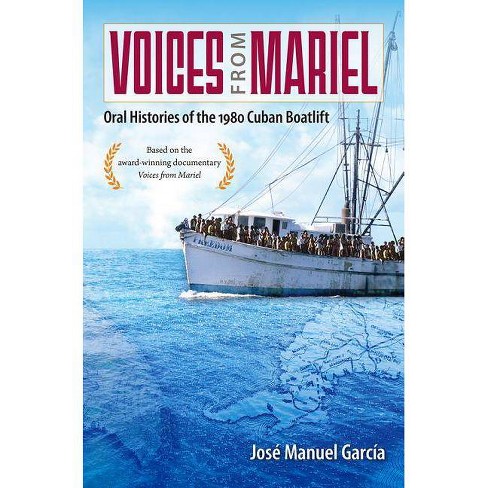 $19.49
5 out of 5 stars with 1 reviews
11 ratings
Shipping
Free standard shipping with RedCard
Loading, please wait...
Help us improve this page

Between April and September 1980, more than 125,000 Cuban refugees fled their homeland, seeking freedom from Fidel Castro's dictatorship. They departed in boats from the port of Mariel and braved the dangerous 90-mile journey across the Straits of Florida. Told in the words of the immigrants themselves, the stories in Voices from Mariel offer an up-close view of this international crisis, the largest oversea mass migration in Latin American history.

Former refugees describe what it was like to gather among thousands of dissidents on the grounds of the Peruvian embassy in Cuba, where the movement first began. They were abused by the masses who protested them as they made their way to the Mariel harbor, before they were finally permitted to leave the country by Castro in an attempt to disperse the civil unrest. They waited interminably for boats in oppressive heat, squalor, and desperation at the crowded tent camp known as "El Mosquito." They embarked on vessels overloaded with too many passengers and battled harrowing storms on their journeys across the open ocean.

Author Jose Manuel Garcia, who emigrated on the Mariel boatlift as a teenager, describes the events that led to the exodus and explains why so many Cubans wanted to leave the island. The shockingly high numbers of refugees who came through immigration centers in Key West, Miami, and other parts of the United States was a message--loud and clear--to the world of the people's discontent with Castro's government and the unfulfilled promises of the Cuban Revolution.

Based on the award-winning documentary of the same name, Voices from Mariel features the experiences of marielitos from all walks of life. These are stories of disappointed dreams, love for family and country, and hope for a better future. This book illuminates a powerful moment in history that will continue to be felt in Cuba and the United States for generations to come.

5 out of 5 stars
Would recommend
Anonymous - 2 months ago
This book allows the reader to fully invest in the story line. Voices of Mariel is a must read.
1 guest found this review helpful. Did you?
Report review