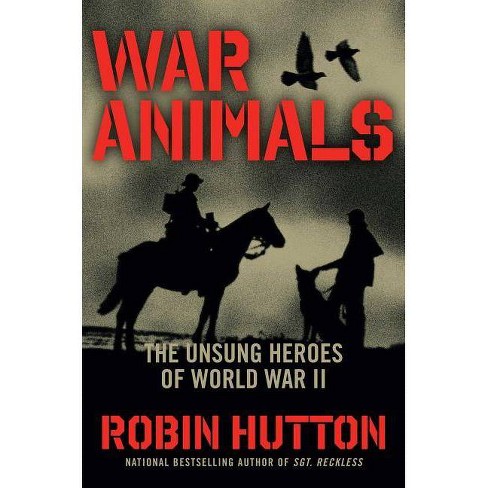 "This book will delight both animal lovers and military buffs!" -- Elizabeth Letts, bestselling author of The Eighty Dollar Champion Millions rallied to the cause of freedom against Nazism and the menace of Imperial Japan. But did you know that some of those heroes had fur, or feathers? War animals guarded American coasts against submarine attack, dug out Londoners trapped in bomb wreckage, and carried vital messages under heavy fire on Pacific islands. They kept up morale, rushed machine gun nests, and even sacrificed themselves picking up live grenades. Now Robin Hutton, the bestselling author of Sgt. Reckless: America's War Horse, tells the heart-warming stories of the dogs, horses, mules, pigeons--and even one cat--who did their bit for the war effort. American and British families volunteered beloved family pets and farm dogs to aid in the war effort; Americans, including President Roosevelt, bought honorary commissions in the reserves for lapdogs and other pets not suitable for military duties to "exempt" them from war service and raise money to defeat Hitler and Tojo. Many of these gallant animals are recipients of the prestigious PDSA Dickin Medal, the "Animals' Victoria Cross." In War Animals: The Unsung Heroes of World War II you'll meet: -Judy, the POW dog who helped her beloved human survive brutal Japanese prison camps
-Cher Ami, the pigeon who nearly died delivering a message that saved American troops from death by friendly fire
-Beauty, the "digging dog" who sniffed out Londoners buried in the wreckage of the Blitz--along with pets, including one goldfish still in its bowl!
-Olga, the horse who braved shattering glass to do her duty in London bombings
-Smoky, the Yorkshire terrier who did parachute jumps, laid communications wire through a pipe so small only she could navigate it, became the first therapy dog--and starred on a weekly TV show after the War
-Simon, the war cat whose campaign against the "Mao Tse Tung" of the rat world saved food supplies and his ship's crew
-Chips, who guarded Roosevelt and Churchill during the Casablanca Conference, and the only dog to earn a Silver Star for his heroics The shining loyalty and courage of these heroes is a testimony to the enduring bond between us and the animals we love.

"As a Marine Scout Dog Handler who served in Vietnam with dog Stormy, I have to say this is one awesome book. It is full of information on the war animals of World War II. This is a must read."--Ron Aiello, President, United States War Dogs Association

"A heartwarming experience. Hutton gives readers faith that our humanity comes not only from our own element, but also from the creatures who give unconditionally, and in times of war--the beloved animals we put our unconditional faith in."--Scott Huesing, U.S. Marine Corps major (retired) and author of Echo in Ramadi: The Firsthand Story of U.S. Marines in Iraq's Deadliest City

"I can't think of another author who has done more to honor the animals of war than Robin Hutton. In War Animals, she brings to life the forgotten stories of countless brave military heroes--heroes with wings, hooves, and paws, whose bravery and sacrifice should never be forgotten. Hutton brings her sharp eye, careful research, and lively writing style to honor our anima friends who fought alongside their human partners. This book will delight both animal lovers and military buffs!"--Elizabeth Letts, bestselling author of The Eighty-Dollar Champion and The Perfect Horse

"Robin Hutton has performed above and beyond the call of duty in gathering these incredible stories of service animals during wartime into one handy volume. These dogs, horses and birds (plus one amazing cat!) show over and over that bravery, dedication, and loyalty aren't just human traits. Every page brings another marvel."--Robert Weintraub, author of No Better Friend: One Man, One Dog, and Their Extraordinary Story of Courage and Survival in WWII

"Robin Hutton's telling of the story of animals used in war brings to light a history unknown to many. Hutton's work tracks the use of dogs, pigeons and horses starting with WWII, and tells the compelling, heartwarming, and sometimes tragic stories of the animal heroes that have served in the military."--Toni Kiser, co-author of Loyal Forces: The American Animals of World War II and Assistant Director for Collections Management at the World War II Museum in New Orleans

"With a sense of humor and attention to historical detail and context, author Robin Hutton brings stories of animal warriors to the pages of War Animals. Readers who think they know their World War II history will discover new facts. Animal fanciers will delight in the tales of smart brave dogs and other critters pressed into military service--and maybe shed a tear or two. And we have increased respect for the handlers who worked with these talented animals on the home front, in the Pacific, and in Europe. A great read!"--Lin Ezell, Director, National Museum of the Marine Corps

ROBIN HUTTON has spent her adult life working in major event productions and the motion picture business. She is co-author of The 9 Indispensable Ingredients in Every Hit Film, TV Show, Play and Novel and was the writing and producing partner of Tom Laughlin (the legend of Billy Jack fame) for over thirty years. Hutton is the author of Sgt. Reckless: America's War Horse and president of Angels Without Wings, Inc., a non-profit corporation that spearheaded the development and dedication of three national monuments to Sgt. Reckless. She was named Patriotic Citizen of the Year by the Military Order of the Purple Heart for her work.
If the item details above aren’t accurate or complete, we want to know about it. Report incorrect product info.