War of the Werelords - (Wereworld) by Curtis Jobling (Paperback) 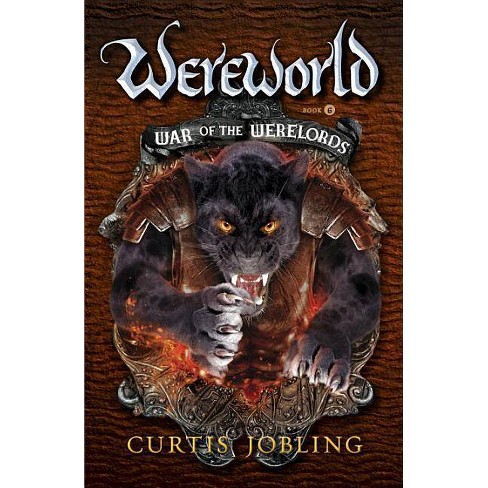 "While the war between the Catlords and the Wolf embroils the Seven Realms in chaos, Drew must take his final stand against the man who has become Lyssia's deadliest villain: his own best friend, the Boarlord Hector, whose powers of dark magick are raging out of control"--

The epic conclusion to the Wereworld saga! In this thrilling finale to the Wereworld saga, secrets are finally revealed, truths come to light, and alliances are tested. While the war between the Catlords and the Wolf embroils the Seven Realms in chaos, Drew must take his final stand against the man who has become Lyssia's deadliest villain: his own best friend, the Boarlord Hector, whose powers of dark magick are raging out of control.

Game of Thrones for the tween set. --School Library Journal

Praise for the Wereworld series by Curtis Jobling: Rise of the Wolf
"Jobling's debut initiates a sure-to-be-long series of Wereworld tales, pure fantasy adventure with plenty of horror in the mix...this will find broad appeal among lovers of adventure fantasy, especially those mourning the end of John Flanagan's Ranger's Apprentice."--Kirkus Reviews "[A] rousingly gory heroic fantasy...there are plenty of brutal fights for action lovers, and the quest has some stirring moments. Give this series opener to fans of Flanagan's Ranger's Apprentice series."--Booklist "In this thrilling middle-grade debut, first in the Wereworld series, British author/illustrator Jobling (the designer of the Bob the Builder TV series) creates a memorable new setting in which were-creatures rule...a thoroughly enjoyable adventure that makes particularly inventive use of its shape-shifter elements and mythology."--Publishers Weekly (starred review) "Even reluctant readers should enjoy Wereworld as the first in a new series...as a fantasy world it is superior to Eragon, and pure fun."--The Times (London) "The nail-biting pace and plot turns will keep the reader wondering exactly how Drew will resolve it all...there is enough romantic heat, girl power, and vulnerable tough guys to guarantee interest from the Twilight crowd."--BCCB "This first book in the series hits all the bases for a fairy tale with fangs...this will be a popular book, particularly for the young sword and sorcery fan contingent."--Library Media Connections "Assured and lively enough to captivate with its strong world building and approachable language...will draw followers to the sequel like Drew to a damsel in distress."--VOYA "Can he write it? Yes, he can!...a good mix of the traditional pre-industrial society with shape-shifters, and looks like it could be the start of a very fun ride."--Geek Dad on Wired.com Rage of Lions"Give Jobling a... hand for crafting a sequel that's even more lurid and action packed than the opener."--Kirkus Reviews "Game of Thrones for the tween set..."--School Library Journal Shadow of the Hawk"Plotlines and were-creatures proliferate ...there's enough spilled blood and shape changing here to appease the most demanding fans of either."--Booklist War of the Werelords
The plethora of living and undead werebeasts--from wolves to sharks and even a woolly mammoth--gives the saga a distinctive character. --Booklist

Curtis Jobling (www.curtisjobling.com) is the author of the Wereworld series. He's also known for being the designer of the BAFTA-winning BBC show Bob the Builder and has worked on both Wallace & Gromit's A Close Shave and Tim Burton's Mars Attacks! He lives in Cheshire, United Kingdom.
If the item details above aren’t accurate or complete, we want to know about it. Report incorrect product info.