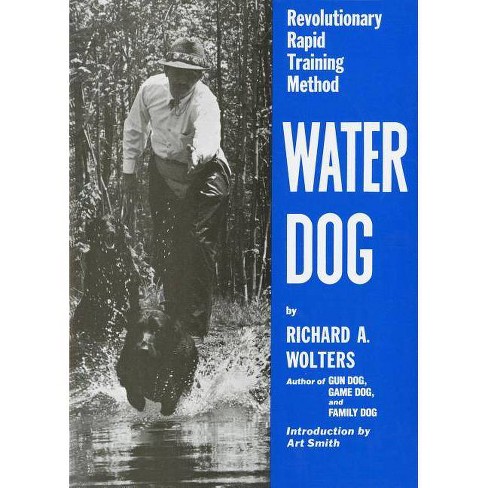 The classic bestselling dog training book for the person with limited time who wants to train a working retriever fast. Containing revolutionary scientific information on the mental development of your pet, Water Dog is a step by step training book with no extraneous material. It covers everything from the day you get your puppy to the finished dog, showing you the complete training procedures step by step in picture sequence. It will show you not only what to expect of your dog but what your dog can expect of you. Full of information about using the right commands and utilizing the Dummy-Launch, a training device co-developed by the author, this how-to guide will make training easy, fast, and fun--for you and your dog. "Anyone who wants to try turning his dog into a well-mannered retriever will do well with Water Dog."--The New York Times

Praise for Richard A. Wolters "The most popular method ever. Because it works and it's easy!"--Field & Stream on Family Dog "Gun Dog is one of the most valuable, probably THE most valuable, training tools the average amateur could have."--Sports Afield "Water Dog is a classic--definitely the place to start with your new retriever."--David G. Meisner, Editor and Publisher, Gun Dog magazine "Anyone who wants to try turning his dog into a well-mannered retriever will do well with Water Dog."--The New York Times "Wolters has produced a solid book that will be of great help to anyone training his retriever to work. He is an acknowledged master in the field and an excellent instructor."--Dog Fancy on Game Dog

RICHARD A. WOLTERS was a leader in applying the scientific discoveries of animal behaviorists to dog training. His books on training--Game Dog, Water Dog, Gun Dog, Family Dog, and Home Dog--are recognized as classics in their fields. His historical book, The Labrador Retriever: The History...The People, was chosen as Best Dog Book of the Year by the Dog Writers Association of America. In 1984 the DWAA honored Mr. Wolters as both Writer of the Year for Game Dog and Columnist of the Year for his popular column "Gun Dog" in Gun Dog magazine. Well-known for his lectures and seminars on retriever training, Mr. Wolters also was a president of the Westchester, New York, Retriever Club, as well as a vice president and director of the North American Hunting Retriever Association, which he was influential in founding. A veritable Renaissance man, Mr. Wolters worked as an atomic scientist, fine-arts teacher, photographer, and as picture editor at Sports Illustrated. His sporting interests included hunting, angling, bobsledding, ballooning, and soaring in sailplanes, in which he held the highest rating.
If the item details above aren’t accurate or complete, we want to know about it. Report incorrect product info.