We Are Bellingcat - by Eliot Higgins (Hardcover) 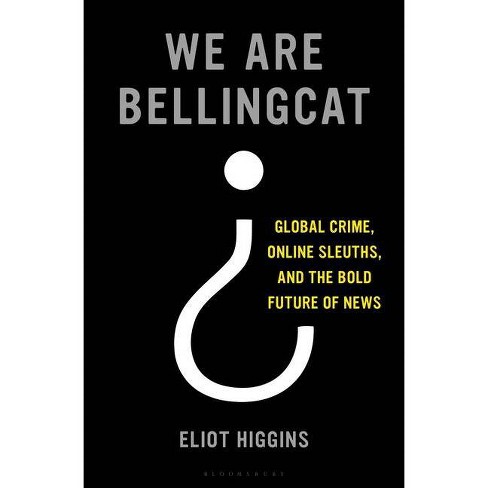 The page-turning inside story of the global team wielding the internet to fight for facts and combat autocracy--revealing the extraordinary ability of ordinary people to hold the powerful to account.

"Fascinating ... A powerful, exhortatory call to arms."--New York Times Book Review "A David-and-Goliath story for the digital age ... Thrilling."--Foreign Policy The page-turning inside story of the global team wielding the internet to fight for facts and combat autocracy--revealing the extraordinary ability of ordinary people to hold the powerful to account. In 2018, Russian exile Sergei Skripal and his daughter were nearly killed in an audacious poisoning attempt in Salisbury, England. Soon, the identity of one of the suspects was revealed: he was a Russian spy. This huge investigative coup wasn't pulled off by an intelligence agency or a traditional news outlet. Instead, the scoop came from Bellingcat, the open-source investigative team that is redefining the way we think about news, politics, and the digital future. We Are Bellingcat tells the inspiring story of how a college dropout pioneered a new category of reporting and galvanized citizen journalists--working together from their computer screens around the globe--to crack major cases, at a time when fact-based journalism is under assault from authoritarian forces. Founder Eliot Higgins introduces readers to the tools Bellingcat investigators use, tools available to anyone, from software that helps you pinpoint the location of an image, to an app that can nail down the time that photo was taken. This book digs deep into some of Bellingcat's most important investigations--the downing of flight MH17 over Ukraine, Assad's use of chemical weapons in Syria, the identities of alt-right protestors in Charlottesville--with the drama and gripping detail of a spy novel.

If you don't know what Bellingcat is, this is your chance to learn: We Are Bellingcat tells the story of the most innovative practitioners of open-source intelligence and online journalism in the world. They have told the true stories of the missiles that downed the MH17 airplane in Ukraine and the chemical weapons used by the Syrian dictator Bashar al-Assad. They have identified the neo-Nazis in Charlottesville, exposed a Kremlin hit team, found ISIS supporters in Europe. In this book their founder, Eliot Higgins, describes how and why they do it. - Anne Applebaum, author of TWILIGHT OF DEMOCRACY and GULAG

In a world of disrupters, Eliot Higgins and Bellingcat have turned the world of intelligence gathering on its head and put to shame the intelligence services of the biggest and most powerful countries in the world. We Are Bellingcat tells the gripping story of how the Bellingcat team used innovative investigation techniques to expose some of the gravest state crimes of our era. Their success is a wake-up call to governments who have been asleep at the wheel about what is needed to fight dictators and kleptocrats. - Bill Browder, author of RED NOTICE Bellingcat has pioneered a new field of investigation that has proven key to understanding the clandestine criminal actions of Russia and other nations both at home and abroad. They have exposed numerous war crimes, human rights violations, and much more. If there were a Nobel Prize in uncovering war crimes, Bellingcat would receive it. No wonder authoritarian and criminal regimes hate them so. - Toomas Hendrik Ilves, former President of Estonia A David-and-Goliath story for the digital age ... Like Bellingcat's work, this book is both straight to the point and thrilling. It is a balm for the soul of anyone who has grown weary of the chaos wrought by social media and a timely reminder that--in the right hands--the internet can still be an awesome force for good. - Foreign Policy As Higgins's fascinating book unfolds, he evolves from a lone digital Sherlock Holmes to the head of Bellingcat: a conglomerate of researchers battling the 'counterfactual community, ' Syrian government propaganda, powerful Russian trolls and government-funded cyberespionage units...Chronicling the dark arts of dogged internet investigation, this book is a powerful, exhortatory call to arms for citizen journalists fighting for truth in a world where authenticity has become the most elusive of commodities. - The New York Times Book Review A lively account...there is an awful lot to be on guard against in cyberspace but also a willing and utterly capable army of defenders against those who would disinform, misinform, and outright lie for political advantage. Those who are not allergic to facts will find this a provocative, even inspirational read. - Kirkus Reviews Recent [open-source] journalism achievements--such as Bellingcat's investigations ... are compelling not just for their findings, but for the openness with which they explain the process of discovery. This is the closest that journalism has come to a scientific method. - New York Review of Books Higgins's self-taught skills are impressive...fans of Bellingcat and advocates of citizen journalism will be fascinated by the behind-the-scenes details. - Publishers Weekly Higgins' book is an optimistic one and that's both welcome and refreshing . . . The tools and techniques Bellingcat uses are being shared and taught to groups around the world in hopes of capturing records of human rights abuses and war crimes, but also to ensure that a true accounting of the facts is preserved. In this post-truth era, such accounting is more critical than ever. - Diplomatic Courier Uplifting . . . Riveting . . . What will fire people through these pages, gripped, is the focused, and extraordinary, investigations that Bellingcat runs . . . Each runs as if the concluding chapter of a Holmesian whodunit. - Telegraph A fascinating book . . . The lesson of this deeply impressive book is that, despite the noise, the propaganda and the lies, the truth is everywhere. You just have to know how to look for it. - Spectator We Are Bellingcat is Higgins's gripping account of how he reinvented reporting for the internet age . . . Bellingcat's rise reveals something new about our digitally mediated times: spying is no longer the preserve of nation states - anyone with an internet connection can do it. - Luke Harding, Observer John le Carré demystified the intelligence services; Higgins has demystified intelligence gathering itself. - Financial Times Offers some hope that ordinary people, as well as the media, can judge events based on documented facts, not just wild assertions. - The Tyee Jaw-dropping . . . We Are Bellingcat reveals the power within each one of us to pierce the walls of disinformation and learn the truth about what's happening out there. - New York Journal of Books Higgins traces his improbable journey from college dropout and video-game player to open-source intelligence pioneer...He recounts this unlikely tale with fascinating detail and fervor, making We Are Bellingcat a mix of memoir, manifesto, and police procedural: CSI for the international relations set. --Foreign Affairs

Eliot Higgins is the founder of Bellingcat, an international collective of researchers, investigators, and citizen journalists using open-source and social media investigation to probe some of the world's most pressing stories. Higgins also sits on the technical advisory board of the International Criminal Court in The Hague. In 2018 he was a visiting research associate at King's College London and at the University of California, Berkeley. @EliotHiggins
If the item details above aren’t accurate or complete, we want to know about it. Report incorrect product info.