We're Not from Here - by Geoff Rodkey (Hardcover) 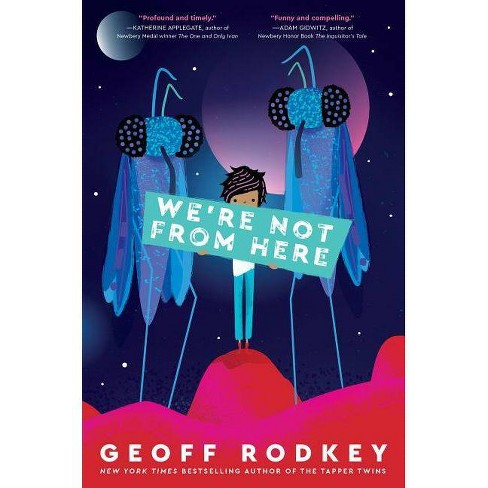 The "New York Times"-bestselling creator of the Tapper Twins series delivers a topical, sci-fi middle-grade novel that proves friendship and laughter can transcend even a galaxy of differences.

Imagine being forced to move to a new planet where YOU are the alien! From the creator of the Tapper Twins, New York Times bestselling author Geoff Rodkey delivers a topical, sci-fi middle-grade novel that proves friendship and laughter can transcend even a galaxy of differences. The first time I heard about Planet Choom, we'd been on Mars for almost a year. But life on the Mars station was grim, and since Earth was no longer an option (we may have blown it up), it was time to find a new home. That's how we ended up on Choom with the Zhuri. They're very smart. They also look like giant mosquitos. But that's not why it's so hard to live here. There's a lot that the Zhuri don't like: singing (just ask my sister, Ila), comedy (one joke got me sent to the principal's office), or any kind of emotion. The biggest problem, though? The Zhuri don't like us. And if humankind is going to survive, it's up to my family to change their minds. No pressure.

A Kirkus Reviews Best Book of the Year! A quirky sci-fi adventure with a surprising layer of political irony.--Kirkus Reviews, starred review Rodkey explores heady concepts such as immigration, tolerance, culture shock, and relative humor in this slapstick-laden allegory--Publishers Weekly, starred review An excellent title for discussion." -The Bulletin "Whip-smart, wildly inventive, and truly important." -Katherine Applegate, author of Newbery Medal winner The One and Only Ivan Who knew that giant talking mosquitos and brilliant marshmallow girls on a distant planet could provide such crucial insight into what is happening on our planet right now? -Adam Gidwitz, author of Newbery Honor book The Inquisitor's Tale

Geoff Rodkey is the author of the bestselling Tapper Twins comedy series; the Chronicles of Egg adventure trilogy; and The Story Pirates Present: Stuck in the Stone Age, a comic novel bundled with a how-to guide for kids who want to create stories of their own. He's also the Emmy-nominated screenwriter of such films as Daddy Day Care and RV. Geoff grew up in Freeport, Illinois and began his writing career on his high school newspaper. He now lives in New York City with his wife, three sons, and an easily confused gerbil. Learn more at geoffrodkey.com, and follow Geoff on Twitter at @GeoffRodkey.
If the item details above aren’t accurate or complete, we want to know about it. Report incorrect product info.