What Is Real? - by Adam Becker (Hardcover) 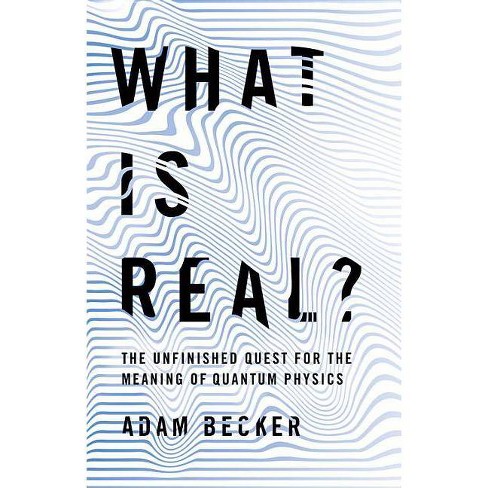 "Quantum mechanics is humanity's finest scientific achievement. It explains why the sun shines and how your eyes can see. It's the theory behind the LEDs in your phone and the nuclear hearts of space probes. Every physicist agrees quantum physics is spectacularly successful. But ask them what quantum physics means, and the result will be a brawl. At stake is the nature of the Universe itself. What does it mean for something to be real? What is the role of consciousness in the Universe? And do quantum rules apply to very small objects like electrons and protons, but not us? In What is Real?, Adam Becker brings to vivid life the brave researchers whose quest for the truth led them to challenge Bohr: David Bohm, who picked up Einstein's mantle and sought to make quantum mechanics deterministic, all while being hounded by the forces of McCarthyism; Hugh Everett, who argued that everything, big and small, must be governed by the same rules; and John Bell, who went to great lengths to eradicate the power of the god-like observer from the core of quantum physics. And they paid dearly, their reputations, careers, and sometimes lives ruined completely. But history has been kinder to them than their contemporaries were. As Becker shows, the brave intellectual giants have inspired a growing army of physicists and philosophers intent both on making a philosophically more satisfying theory of the universe and a more useful one as well. A gripping story of some of humanity's greatest ideas and the high cost with which many have pursued them, What is Real? is intellectual history at its passionate best"--

The untold story of the heretical thinkers who dared to question the nature of our quantum universe
Every physicist agrees quantum mechanics is among humanity's finest scientific achievements. But ask what it means, and the result will be a brawl. For a century, most physicists have followed Niels Bohr's Copenhagen interpretation and dismissed questions about the reality underlying quantum physics as meaningless. A mishmash of solipsism and poor reasoning, Copenhagen endured, as Bohr's students vigorously protected his legacy, and the physics community favored practical experiments over philosophical arguments. As a result, questioning the status quo long meant professional ruin. And yet, from the 1920s to today, physicists like John Bell, David Bohm, and Hugh Everett persisted in seeking the true meaning of quantum mechanics. What Is Real? is the gripping story of this battle of ideas and the courageous scientists who dared to stand up for truth.

What Is Real? cuts through the confusion, providing a vivid account of this often arcane field, its history, and its numerous controversies.
--Gizmodo

[Becker's] research is as detailed and meticulous...The narrative is enlivened by the personalities of key scientists and physicists....A fascinating revision of pivotal decisions around quantum physics discoveries.--Library Journal

[Becker] unveils a story of the competing schools of thought within the weirdest parts of weird physics.--Popular Mechanics

A joy to read...For anyone who has been intrigued by other popular accounts of the quantum world but came away feeling somewhat cheated by the Copenhagen sleight-of-hand.--Physics World

A page turner...Becker writes very well...To any one with more than a passing interest in QM, how it came to be the way it is, and how it might be otherwise, this book will be irresistible.--MAA Reviews

A riveting storyteller, Becker brings to life physicists who have too long remained in the shadow of Bohr and Einstein.... What Is Real? offers an engaging and accessible overview of the debates surrounding the interpretation of quantum mechanics.--Science

A thorough, illuminating exploration of the most consequential controversy raging in modern science...[Becker] leads us through an impressive account of the rise of competing interpretations, grounding them in the human stories, which are naturally messy and full of contingencies. He makes a convincing case that it's wrong to imagine the Copenhagen interpretation as a single official or even coherent statement.--New York Times Book Review

A useful introduction to the history of quantum theory for scientifically inclined readers.--Kirkus Reviews

Admirably explains the intricacies of quantum physics...[Becker] brings to the foreground the hegemonic nature of a dominant scientific theory in crushing dissent.--Scroll India

Becker has done a great service in putting this fascinating story together into a single easily-digestible volume that is gripping, authoritative, and true....I sincerely hope it gains an extremely wide readership and manages to have a powerful influence.--Quantum Times

Becker...make[s] a case for the importance of philosophy. That's a key call, with influential scientists such as Neil deGrasse Tyson dismissing the discipline as a waste of time. What Is Real? is an argument for keeping an open mind.--Nature

Becker...takes readers on a deep dive into the battle for the heart of quantum physics.--Unbound Worlds

Becker's book is one of the first attempts we have at telling this story in a way that acknowledges how it actually turned out--acknowledges, that is, who won these debates about the Copenhagen interpretation, who lost them, who pretended otherwise, and how they got away with it.... He has clearly done extensive and meticulous historical research.--David Z. Albert, NewYork Review of Books

Impressive...[Becker's] strength is the excavation of stories that show how deeply quantum physics was in thrall to the personalities of its developers. The cast is colourful and expansive, and provides engaging drama...The subtext running through this hugely enjoyable book is that, if we still have a long way to go before we understand reality, we may only have our own prejudices to blame.--New Scientist

In What Is Real? Adam Becker tells a fascinating if complex story of quantum dissidents...An excellent, accessible account.--Wall Street Journal

In this immensely well-researched book, Adam Becker explores the little-known history of principled critiques of the quantum physics establishment, tracing a fascinating skein from the Einstein-Bohr debates all the way to the proliferation of alternatives in the 1970s and beyond. Thorough in its detailed treatment of the key players and their contributions, What Is Real? offers an essential guide to the great quantum controversies that are still raging strong.--Paul Halpern, author of TheQuantum Labyrinth

Quantum mechanics is an extraordinarily successful theory, but for decades physicists have been in stubborn denial about what the theory actually says about the nature of reality. Adam Becker's wonderful book recounts the colorful history of the reality debates, and makes the case that Einstein was right all along.--Sean Carroll, author of The BigPicture

Quantum mechanics is astoundingly successful, but its proper meaning and interpretation remains an open question that vexes physicists to this day. Adam Becker brings this topic to life by explaining the science, and the ongoing human struggle to make sense of the quantum world. His book reads like a novel.--Art Friedman, co-author of Quantum Mechanics and Special Relativity and Classical Field Theory

Remarkable...What Is Real? is a superb contribution both to popular understanding of quantum theory and to ongoing debates among experts...It deserves wide attention and careful study.--Physics Today

Spellbinding....This very book could prove to be a watershed moment for the physics community if it faces up to its own past and its present....If you have any interest in the implications of quantum theory, or in the suppression of scientific curiosity, What is Real? is required reading. There is no more reliable, careful, and readable account of the whole history of quantum theory in all its scandalous detail.--Boston Review

Splendid.... With deeply detailed research, accompanied by charming anecdotes about the scientists...[Becker] hopes to convince us that the Cophenhagen interpretation has had too great an influence on physics for historically contingent reasons.--Washington Post

Tremendously appealing...[Becker] smoothly, easily dramatizes the great debates and the outsized personalities of quantum physics and fits it all into an enthusiastic, readable narrative.--Open Letters Monthly

Adam Becker is a science writer with a PhD in astrophysics. He has written for the New York Times, the BBC, NPR, Scientific American, New Scientist, and other publications. He is a visiting scholar at University of California, Berkeley's Office for History of Science and Technology. He lives in California.
If the item details above aren’t accurate or complete, we want to know about it. Report incorrect product info.