What They Meant for Evil - by Rebecca Deng (Hardcover) 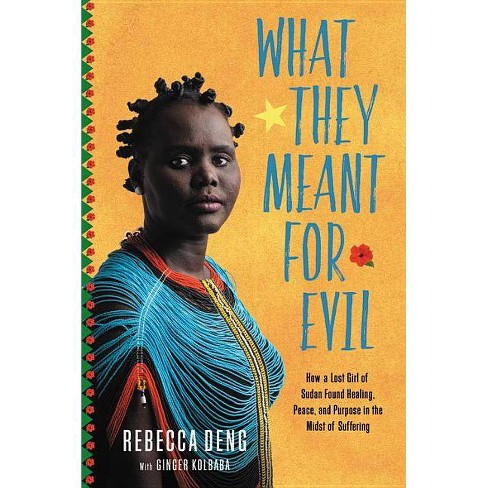 REBECCA DENG, of South Sudan's Dinka tribe, is one of the 89 Lost Girls who came to the United States in 2000 as a refugee after living eight years in Kakuma Refugee Camp in northern Kenya. The violence she experienced as a child during the Second Sudanese Civil War (1983-2005) has given her a deep empathy for children and young adults who face similar situations today. She became a US citizen in 2006. Today Rebecca is an international speaker and advocate for women and children who have been traumatized and victimized by war. She has spoken at the United Nations and served as a Refugee Congress delegate at the United Nations High Commissioner for Refugees (UNHCR) in Washington DC. She also led a sixty-five person team of referendum workers at the 2011 Out of the Country Voting Center for the South Sudanese Independence Referendum. She worked with the American Bible Society's Mission Trauma Healing program, formerly called She's My Sister. She is married and has three children. She resides with her family in Michigan. GINGER KOLBABA is an award-winning author, editor, and speaker. She has written or contributed to more than 30 books, including The Impossible, Your Best Happily Ever After, and The Old Fashioned Way. She has also written a novel series Secrets from Lulu's Cafï¿½. She is a contributing editor for Focus on the Family magazine and a regular columnist for Positive Note magazine. She has published more than 500 magazine and online articles. Ginger is the former editor of Today's Christian Woman magazine, Marriage Partnership magazine, and the founding editor of Kyria.com, all award-winning resources of Christianity Today.
If the item details above aren’t accurate or complete, we want to know about it. Report incorrect product info.