What Will It Take to Make a Woman President? - by Marianne Schnall (Paperback) 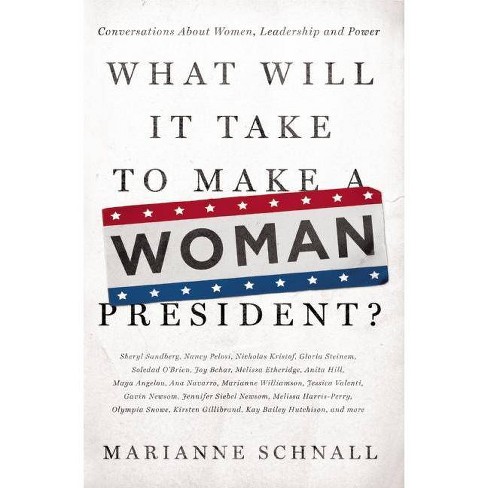 "What Will It Take to Make a Woman President?" features conversations with more than twenty leading politicians, writers, artists, and activists about why America has not yet elected a female president. To find out what it will take to get a woman into the White House, expert interviewer Marianne Schnall looks at the issue from many different angles and perspectives, gathering insights from high profile, influential people from all sectors.
The interviews consider a variety of questions, including:
What would a woman bring to the presidency and to leadership of the US and the world?
What obstacles (societal, political, and self-imposed) have been holding women back?
What changes need to happen to make this a reality?
Are we really ready for a female president?
Featuring conversations about timely, provocative, and rich themes that concern women, politics, and power, "What Will It Take to Make a Woman President?" also includes personal insights and life experiences from the interview subjects themselves. With a comprehensive resource guide for further reading and action, this book takes an essential look at the possibility of women in the White House.

Prompted by a question from her eight-year-old daughter during the 2008 election of Barack Obama--Why haven't we ever had a woman president?--Marianne Schnall set out on a journey to find the answer. A widely published writer, author, and interviewer, and the Executive Director of Feminist.com, Schnall began looking at the issues from various angles and perspectives, gathering viewpoints from influential people from all sectors. What Will It Take to Make A Woman President? features interviews with politicians, public officials, thought leaders, writers, artists, and activists in an attempt to discover the obstacles that have held women back and what needs to change in order to elect a woman into the White House. With insights and personal anecdotes from Sheryl Sandberg, Maya Angelou, Gloria Steinem, Nancy Pelosi, Nicholas Kristof, Melissa Etheridge, and many more, this book addresses timely, provocative issues involving women, politics, and power. With a broader goal of encouraging women and girls to be leaders in their lives, their communities, and the larger world, Schnall and her interviewees explore the changing paradigms occurring in politics and in our culture with the hope of moving toward meaningful and effective solutions--and a world where a woman can be president.

Intriguing interviews exploring the role of women in American political leadership. . . . Barack Obama smashed down one long-closed door in 2008. This book makes a compelling case for another shattering of barriers sooner rather than later. Kirkus Reviews"

"Intriguing interviews exploring the role of women in American political leadership. . . . Barack Obama smashed down one long-closed door in 2008. This book makes a compelling case for another shattering of barriers sooner rather than later." --"Kirkus Reviews"

Marianne Schnall is a widely published writer and interviewer whose work has appeared in a variety of media outlets such as The Huffington Post; O, The Oprah Magazine; Glamour; In Style; Psychology Today; Ms. magazine; The Women's Media Center; CNN.com; and a variety of others. She is the author of Daring to Be Ourselves: Influential Women Share Insights on Courage, Happiness and Finding Your Own Voice, which is based on her interviews with a diversity of well-known women, including Maya Angelou, Gloria Steinem, Jane Fonda, Madeleine Albright, Natalie Portman, Jane Goodall, Alice Walker, and more. Marianne graduated from Cornell University in 1989 with a BA in English, and she is also a graduate of the Women's Media Center's Progressive Women's Voices media and leadership training program. She does a regular radio commentary for WAMC's nationally syndicated show 51% The Women's Perspective, which is carried nationally on NPR, ABC, and Armed Forces Radio stations. She was a contributor to Robin Morgan's anthology, Sisterhood is Forever: The Women's Anthology for a New Millennium. Marianne is the founder and Executive Director of Feminist.com, a leading women's website and nonprofit organization. For over fifteen years, Feminist.com has been fostering awareness, education, and activism for people all across the world. She is also the cofounder of EcoMall.com, one of the oldest environmental websites promoting earth-friendly living. Through her writings, interviews, and websites, Marianne strives to raise awareness and inspire activism around important issues and causes.
If the item details above aren’t accurate or complete, we want to know about it. Report incorrect product info.