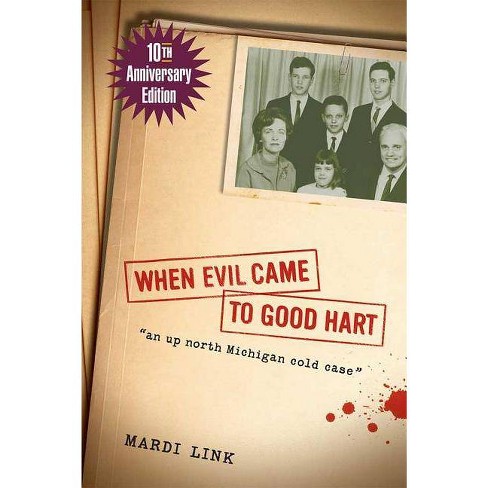 In this page-turning true-life whodunit, author Mardi Link looks into the cold-case files of the murders of a wealthy Detroit-area family in their northern Michigan cabin in 1968, detailing and reviewing all the evidence to date. She crafts her book around police and court documents and historical and present-day statements and interviews, in addition to exploring the impact of the case on the community of Good Hart and the stigma that surrounds the popular summer getaway. Adding to both the sense of tragic history and the suspense, Link laces her tale with fascinating bits of local and Indian lore, while dozens of colorful characters enter and leave the story, spicing the narrative.

During the years of investigation of the murders, officials considered hundreds of tips and leads as well as dozens of sources, among them former secretaries who worked for murder victim Dick Robison; Robison's business associates; John Norman Collins, perpetrator of the "Co-Ed Murders" that took place in Washtenaw County between 1967 and 1969; and an inmate in federal prison in Leavenworth, Kansas, who said he knew who killed the Robison family. Despite the exhaustive investigative efforts of numerous individuals, decades later the case lies tantalizingly out of reach as an unsolved cold case. This edition, published at the 50th anniversary of the murder, includes a new Afterword by Mardi Link. In it, Link discusses information that's come to light since the book's original publication and reflects on how the Robison murders might have been handled differently today.
If the item details above aren’t accurate or complete, we want to know about it. Report incorrect product info.