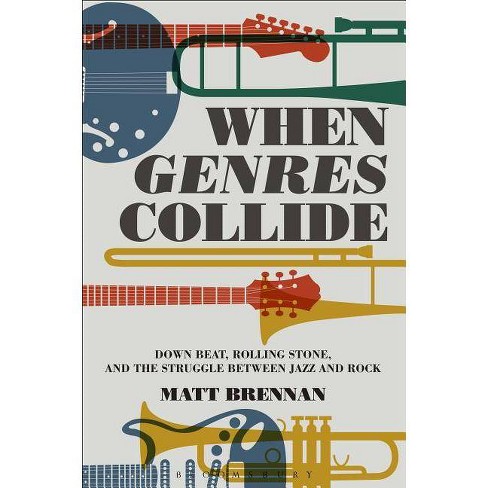 "Matt Brennan looks to the music press of the 1950s and 60s, ... [in doing so] revealing a tangled relationship between jazz and what would become rock." - The Wire

"Based on Brennan's doctoral research, the tone is learned but not turgid. This man has read serious truckloads of music magazines. Helluva job and he's the man to do it." - Jazzwise

"This book is a must read for both students and boffins of criticism, popular music and the social politics that accompanied it." - London Jazz News

"When Genres Collide is most interesting in the way it explains and discusses how the journalistic coverage of each genre tried, mostly unsuccessfully, to incorporate the other. ... Brennan unmasks the history, and while it often seems like little common ground was found, it's enlightening to read about how each side tried." -Under the Radar

"...if you love learning not just about music and the lives of its creators, but also the framework in which music is discussed and understood (and I'm guessing that describes many Pitchfork readers), this book is for you. In the broadest sense, Brennan's book is an overview of trends in American popular music criticism in the 20th century. Focusing on the most significant jazz publication of the century (Down Beat) and the one that popularized rock and pop criticism in the U.S. (Rolling Stone), Brennan digs deep to find what was valued and when, how distinctions between genres were drawn, what was held up as "art music" (in the 1940s, bebop; in the '70s, guitar-based rock) and what was dismissed as merely "dance music" (in the '40s, early R&B in the '70s, disco). Decade by decade, Brennan shows how the assumptions that guide our understanding of musical quality developed, and, in a fascinating tangent, he even uncovers who may have been the first "poptimist" critic: Down Beat's first R&B columnist, the pioneering but now forgotten Ruth Cage." - Pitchfork

"Matt Brennan's When Genres Collide goes beyond accepted wisdom about jazz-rock 'fusion' to trace a long, twisted history of interrelationships between two of the twentieth centuries defining musical forms. A game-changing study of popular music genres and the social function of music criticism." - Steve Waksman, Author of This Ain't the Summer of Love: Conflict and Crossover in Heavy Metal and Punk (2009) and Professor of Music and Sylvia Dlugasch Bauman Professor of American Studies, Smith College, USA

"An intelligent and engaging book. Brennan challenges established assumptions about jazz and rock music and makes us think differently about the way in which history is constructed and understood. A must for anyone interested in popular music, criticism and the politics of genre." - Tony Whyton, Professor of Jazz Studies, Birmingham City University, UK

"Matt Brennan has given us a new perspective on the formation and development of rock and jazz discourse through the 1960s and 1970s, which have had lasting implications. Focusing on Down Beat and Rolling Stone magazines as well as the separate formation of jazz and popular music studies, Brennan argues convincingly that the combined efforts of scholars and writers during the period have given us a world in which jazz and rock remain incommensurable genres." - Kevin Fellezs, author of Birds of Fire: Jazz, Rock, Funk, and the Creation of Fusion (2011)

"This practitioner-informed study challenges the powerful but dangerously misleading assumption that jazz is somehow not a 'popular' music, and in doing so clears the ground for its instructive juxtapositioning with rock. Here at last is a full length study of the way the discourses of jazz and rock faced off and circled each other, sometimes as adversaries, sometimes embracing. This is a major study of an encounter between the two most influential developments in modern music: jazz in the early twentieth century and rock from mid-century. Together they laid down the template for the dynamics of modern popular culture. In a music-scape in which sampling, hybridity and cross-generic syncretisms are the norm, where the old criterion of 'authenticity' has worn threadbare, the history of the relationship between jazz and rock has significant lessons for the cultural dynamics of modernity." - Bruce Johnson, Professor, University of Technology Sydney, Australia