When We Were Strangers - by Alex Richards 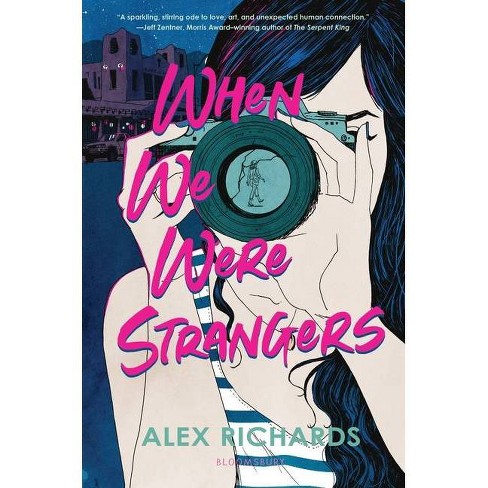 Seventeen-year-old Evie, devastated by her father's death and the knowledge that he had planned to leave their family for another woman pregnant with his child, finds a way forward through a prestigious photography class and handsome classmate Declan.

An exquisitely told story of grief, growing up, and the glorious complexities of love and life. - Kathleen Glasgow, New York Times bestselling author of Girl in Pieces and You'd Be Home Now

From the author of Accidental comes a gripping story about a teen grieving her father's sudden death--and grappling with the shocking secrets he left behind.

Seventeen-year-old Evie Parker is devastated in the wake of her father's sudden death. But she knows something her mother doesn't: the day of his heart attack, her dad was planning to move out. After finding his packed bags, an impulsive Evie puts everything away to spare her mom more heartache. To make matters worse, Evie soon learns the reason her father was going to leave: he had been dating his twenty-two-year-old receptionist, Bree, who is now six months pregnant. Desperate to distract herself, Evie signs up for a summer photography class, where she meets a motley crew of students, including quirky and adorable Declan. Still, Evie can't stop thinking about her father's mistress. Armed with a telephoto lens, she caves in to her curiosity, and what starts as a little bit of spying on Bree quickly becomes full-blown stalking. And when an emergency forces Evie to help Bree, she learns there's more to the story than she ever knew . . . Alex Richards crafts a riveting new story about betrayal, complicated family secrets, and getting to the heart of what matters--ultimately asking readers how far they'd be willing to go to unravel the truth.

"When We Were Strangers is an exquisitely told story of grief, growing up, and the glorious complexities of love and life. A lovely portrait of the artist as a young person, learning to zoom in on her main subject: the truth of her life and what to do with it." --Kathleen Glasgow, New York Times bestselling author of GIRL IN PIECES and YOU'D BE HOME NOW

"When We Were Strangers is a sparkling, stirring ode to love, art, and unexpected human connection. It reminds us that while the valley of grief may be long, we can emerge from it into the light." --Jeff Zentner, Morris Award-winning author of THE SERPENT KING "Alex Richards's eye for detail, perfect-pacing, and snappy dialog make When We Were Strangers a compulsive read about grief, the power of family, friendship, and finding connection where you least expect it." --Shana Youngdahl, author of AS MANY NOWS AS I CAN GET ". . . a beautiful exploration of a family torn apart by secrets and grief . . . . A moving portrayal of grief, family, and the complexity of different perspectives." --Kirkus Reviews (starred review) When We Were Strangers is an affecting, expertly told contemporary YA novel that explores the complexity of love, loss and family. . . . Alex Richards (Accidental) skillfully channels the voice of a teenage girl experiencing emotional turmoil. -Shelf Awareness, starred review

"Absorbing . . . . [an] introspective story of changing emotions and a softening heart." --Publishers Weekly "Richards deftly explores the myriad emotional struggles after an accidental gun death. . . . Tragic, moving and genuine." --School Library Journal on ACCIDENTAL (starred review) "A valuable take on a timely issue." --Kirkus Reviews on ACCIDENTAL (starred review) "In Richards's dramatic debut, Johanna, with her harrowing internal journey and desperate attempts to find closure and peace, is an admirable, convincing heroine who is determined to make things right for herself." --Publishers Weekly on ACCIDENTAL "Richards captures the ongoing struggle and painful reality of such tragic events with raw honesty and compassion and affirms the healing power of love. Fans of realistic fiction and "ripped from the headlines" stories will find this a compelling read." --The Horn Book Magazine on ACCIDENTAL

Alex Richards is the author of Accidental and is a freelance magazine contributor. She is a terrible navigator (just ask the African jungle she got lost in) but makes up for it with a dark sense of humor and home-made horror films. Raised in New Mexico, she and her family live in Brooklyn.
alexrichards.nyc
@alexgirlnyc

The Magic of Japanese Zen Gardens - by Thomas Kierok (Hardcover)

Here's to Us - by Becky Albertalli & Adam Silvera

The Hollow Inside - by Brooke Lauren Davis

Defy the Night - by Brigid Kemmerer

Once Upon a Broken Heart - by Stephanie Garber

When We Were Strangers - by Alex Richards (Paperback)

A Family of Strangers - by Emilie Richards (Paperback)

You Brought Me the Ocean - by Alex Sanchez (Paperback)

When We Were Strangers - by Pamela Schoenewaldt (Paperback)