Where Dreams Descend - (Kingdom of Cards) by Janella Angeles 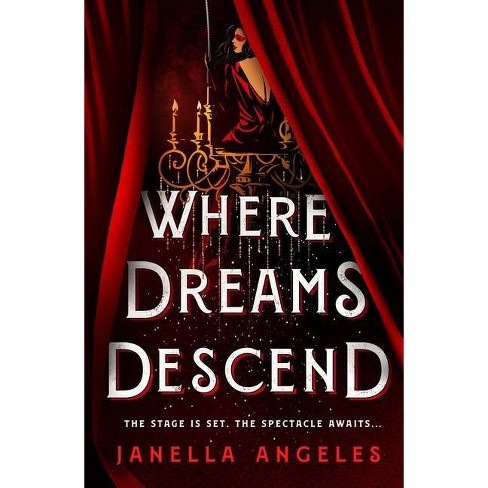 A star showgirl must win a magician's competition riddled with danger in order to secure her freedom, even as a handsome magician distracts her heart, in this lush, unforgettable debut fantasy

In a city covered in ice and ruin, a group of magicians face off in a daring game of magical feats to find the next headliner of the Conquering Circus, only to find themselves under the threat of an unseen danger striking behind the scenes.

As each act becomes more and more risky and the number of missing magicians piles up, three are forced to reckon with their secrets before the darkness comes for them next. The Star: Kallia, a powerful showgirl out to prove she's the best no matter the cost The Master: Jack, the enigmatic keeper of the club, and more than one lie told The Magician: Demarco, the brooding judge with a dark past he can no longer hide Where Dreams Descend is the startling and romantic first book in Janella Angeles' debut Kingdom of Cards fantasy duology where magic is both celebrated and feared, and no heart is left unscathed. [A] spellbinding melody of a book, and the true magic is how Angeles puts all the best parts of an enrapturing theatrical performance onto paper and ink. From the gripping twists in the first pages all the way to the final, heartbreaking crescendo, Where Dreams Descend will surge you to your feet in a standing ovation." - Sara Raasch, New York Times bestselling author of the Snow Like Ashes trilogy

BOOKISH, Ten 2020 Debut Novels You Won't Want to Put Down

BOOK RIOT, 8 of The Best Magical Cities in YA Books

BUSINESS INSIDER, The 33 best new books to read this spring - according to Goodreads BUSTLE, 23 Debut Books That Are Too Good To Ignore

BUZZFEED, 29 YA Fantasy Books We Can't Wait To Read In 2020 CULTURESS, 20 upcoming YA books we can't wait to read in 2020 EPIC READS, 26 YA Retellings That You Should Be Looking Forward to in 2020 GOODREADS, The 38 Most Anticipated YA Novels of 2020 KIRKUS, Best YA Fantasy and Science Fiction of 2020 THE NERD DAILY, The Most Anticipated 2020 Book Releases and 20 SFF YA Debuts To Watch Out For In 2020 POPSUGAR, 27 Exciting Debut Authors You Can Support During the Shutdowns ASIAN JOURNAL, Anticipated 2020 book releases by Filipino & Fil-Am authors SYFY.COM, Eight YA SFF Reads To Pick Up In August THE YOUNG FOLKS, 10 Spring 2020 Reads That Prove Books and Music Go Hand-In-Hand A lush, captivating blend of The Phantom of the Opera and fresh, new magic. ...As the romantic tension ratchets up, so deepen the mysteries. Readers will ache for the next installment. - KIRKUS (Starred Review) Readers will find themselves quickly immersed in this quirky, well-paced tale of danger, adventure, and magic. The enigmatic ending reassures fans that the mysteries have answers that are yet to be discovered, and that there is more to come in the second part of this Kingdom of Cards duology. Give this to those who enjoyed Cole's Arcana Chronicles or Powell's Game of Triumphs twosome. - BOOKLIST Formidable female characters and spectacular set pieces mark this ambitious series launch from debut author Angeles. - PUBLISHERS WEEKLY Angeles's deep commitment to world-building means that this debut novel has atmosphere galore. It's lush and amazing at every turn, with fire, smoke, mirrors, costumes, and more. - SCHOOL LIBRARY JOURNAL Perfect for fans of Moulin Rouge and The Phantom of the Opera, Angeles' debut is spectacular, spectacular! - BUZZFEED If you're looking for a spectacle of a read, look no further than Where Dreams Descend, which is so atmospheric you will feel like your world is sparkling. - BITCH MEDIA, 25 YA Novels Feminists Should Read in 2020 A lush tale of love, lies, and magic - and one of the most memorable YA fantasies you'll read this year. - CULTURESS This is an intricate love song between the book and the reader, one expertly composed by a phenomenal author. Not only does Janella Angeles seamlessly weave together a fantasy where illusions seem to have more power than reality itself, but she executes each scene with the grace of a dancer gliding across the stage. - THE NERD DAILY The perfect summer fantasy read. - POPSUGAR An absolute success. ...It met every expectation and more. This story was unbelievable and so much fun to read. - YA BOOKS CENTRAL A sweeping, atmospheric debut, Where Dreams Descend by Janella Angeles is perfect for fans of Caraval. - THE YOUNG FOLKS Janella Angeles steals the 2020 show with her fiercely imagined debut starring larger than life characters, a dangerous world alive with magic, and a dizzying dose of grab-a-fainting-couch-and-swoon-away romance! - Roshani Chokshi, New York Times bestselling author of The Gilded Wolves Where Dreams Descend is a glamorous dark gem of a tale, sparkling with romance, magic, and intrigue. Readers will be captivated by prima donna Kallia as the mystery is slowly unmasked. Bravissima! - Julie C. Dao, author of Forest of a Thousand Lanterns Vibrant imagery, jaw-dropping set pieces, sizzling romantic tension, and unstoppable heroine Kallia bring this ambitious debut novel to spectacular life. Fans of Caraval and The Night Circus will be delighted! - Claire Legrand, New York Times bestselling author of Furyborn [A] spellbinding melody of a book, and the true magic is how Angeles puts all the best parts of an enrapturing theatrical performance onto paper and ink. From the gripping twists in the first pages all the way to the final, heartbreaking crescendo, Where Dreams Descend will surge you to your feet in a standing ovation." - Sara Raasch, New York Times bestselling author of the Snow Like Ashes trilogy

JANELLA ANGELES is a Filipino-American bestselling author who got her start in writing through consuming glorious amounts of fanfiction at a young age--which eventually led to penning a few of her own, and later on, creating original stories from her imagination. A lifelong lover of books, she's lucky enough to be working in the business of publishing them on top of writing them. She currently resides in Massachusetts, where she's most likely to be found listening to musicals on repeat and daydreaming too much for her own good. Where Dreams Descend is her first book.
If the item details above aren’t accurate or complete, we want to know about it. Report incorrect product info.