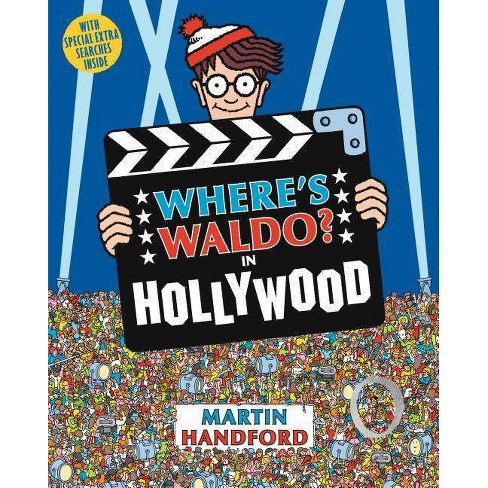 Hey, Waldo fans! Sharpen your eyes and your wits, because Waldo is taking you on a whole new star-studded adventure. That's right, you're going to Hollywood! Follow Waldo--if you can find him--through a cast of thousands on the bustling streets of the great movie classics. Is he there in the chorus line of that musical in production, or up on the ramparts of that epic war film? Or is our elusive, bespectacled hero right in the middle of the swashbuckling escapades of the Three Musketeers? Waldo and all his lost objects are harder to find than ever in this hilarious new challenge for eager Waldo-hunters everywhere!

The maniacal amount of activity present in Waldo's Hollywood jaunt is alternately daunting and dazzling. Waldo and friends meander through sets of movie spectaculars . . . Moviemakers, actors, tourists, and spectators [take] part in what appears to be cleverly staged mayhem. Younger Waldo fans will be successfully entertained; older ones will appreciate the sly humor of the 'caught in the act' illustrations.
--Booklist

Martin Handford, the man behind the mind-boggling Waldo books, began his career as a freelance illustrator specializing in drawing crowd scenes. "I can't tell you how pleased I am that Waldo has taken on a life of his own," he says. "I'd like to inspire children to open their minds to explore subjects more, to be aware of what's going on around them. I'd like them to see wonder in places that may not have occurred to them." Martin Handford lives in England.
If the item details above aren’t accurate or complete, we want to know about it. Report incorrect product info.