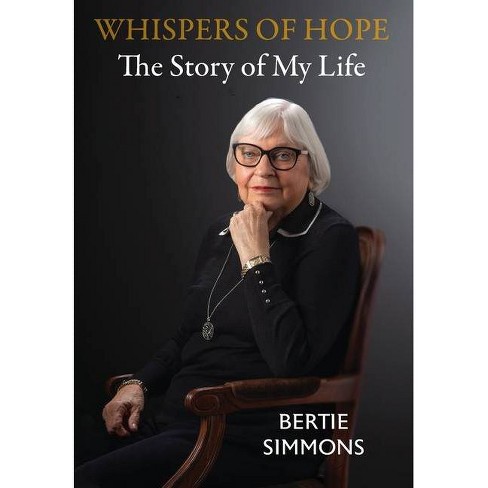 Whispers of Hope, The Story of My Life, is a compelling narrative detailing the life of a young girl born in the deep south during the Jim Crow era. Her tale includes her realization that to make a better life for herself and others, she must run away from the struggles of her young life and go headlong into a world about which she knows nothing.

Bertie Simmons eventually finds her way to Houston where she serves successfully for 58 years in many leadership positions within a large urban school district. Her career included experiences as a teacher, elementary school principal, assistant superintendent, district superintendent, and high school principal. Whispers of Hope allows the reader to witness the painfully slow process of integration and introduces the heroes who demonstrated the courage to fight for equity in education.

Bertie Simmons' journey includes numerous awards and recognitions such as being named HEB's Best High School Principal in Texas award in 2011 and KHOU's Spirit of Texas award. In addition, Furr was one of only three schools in the nation identified for the College Board Inspiration Award in 2011.

The story culminates with her adventures and challenges as the principal in a "throwaway" high school labeled "a pipeline to prison" and a "drop-out factory." The reader learns of her seventeen-year tenure at Furr High School and her innovative approach to building a culture of community and student success that leads to the school receiving the XQ ten-million-dollar grant from Laurene Powell Jobs in 2016 to rethink high schools. Known as a visionary and a change agent who brought out the best in her students, the high-energy educator arrived at Furr High School at 6:30 a.m. each school day.

Bertie Simmons guides us through the painful experience of having her dreams dashed, and yet, she emerges with a strong commitment to spreading hope across the landscape. Bertie Simmons emerges strong and valiant. Whispers of Hope is a hero's journey.