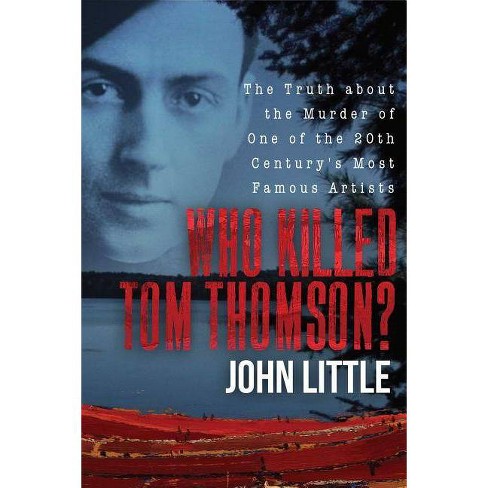 "What...Little has done is take a novel approach to a mystery that seems, at times, to have been examined to death. First, he has done an admirable job of assembling the actual evidence, the hearsay evidence and all the various theories, from solid to ridiculous, concerning the death of Tom Thomson. His research he then turned over to the two former detectives whose professional careers were taken up solving difficult crimes...John Little's key contribution to this ever-spinning tale was to bring in qualified investigators as 'consultants.'"
--Roy MacGregor, The Globe and Mail "Little has done a service in assembling and analyzing the collective research of earlier Thomson scholars such as David P. Silcox, Roy MacGregor, Joan Murray, and Harold Town. 'Anything that I might have added to the research and data of the Tom Thomson story is but a footnote compared to the work of all those who came before me, ' Little writes. In its accumulation of research and analysis, Who Killed Tom Thomson is more than just a footnote. The police officers' conclusions, which are solid so far as they go, remove some of the mystery surrounding Thomson's death."
--Quill & Quire
"For 30 years, author John Little has pursued the fate of the great Tom Thomson in the footsteps of his father, who spent 30 years before that investigating the Ontario-born painter's 1917 death. (Thomson's body was found in Canoe Lake days after his upturned canoe was spotted.) .... The detectives concluded from the information given them that Thomson didn't drown, as was initially suspected, and didn't commit suicide. Thomson, they say, was murdered.... (One theory is he was shot, another that he was clubbed.) The sleuths explain their reasoning in detail--which itself is well worth reading."
--Winnipeg Free Press
"This is a fascinating read. The narrative is compelling, while John Little presents the facts and testimony surrounding the death of Tom Thomson. As a detective, the facts of this case strongly suggest to me that the original coroner's conclusion got it wrong, and yet the way the story is presented did not in any way attempt to lead me to a particular conclusion. A crime was committed here and John has shone the brightest light to date on it."
--Troy Martin, detective constable, Ontario Provincial Police "John Little is uniquely qualified to write about the death of Tom Thomson. Not only did he grow up immersed in his father's incredible quest to redefine the mystery, but he is also a talented writer who knows how to tell a great story. This book ripples with authority and passion carefully balanced on a foundation of meticulous research. The result is a crackling page-turner that has the reader peering over the shoulders of the author and the detectives as they dig through a century-old cold case, trying to determine once and for all who--or what--killed Tom Thomson. A superb read!"
--Andrew Wagner-Chazalon, editor of Dockside Magazine and author of The Hidden World of Huckleberry Rock, Muskoka Traditions, and Grace and Speed "Confronting the enduring controversy one hundred years after Thomson's death over whether he was a drunk who fell from his canoe or was murdered, John Little has done the painstaking research that's long been most needed in this astonishingly elusive cold case. Now, Little has produced a grippingly detailed true-life thriller of intrigue, jealousies, and accusations pointing strongly to two "persons of interest" as the likely culprit. The book, Little says, is 'the closest thing we'll ever get' to solving the mystery surrounding Tom Thomson's tragic death. But I assure you, readers will come away with definite opinions on how Thomson's promising, creative life was purposefully extinguished."
--Ellie Tesher, syndicated advice columnist, author of The Dionnes, and former Toronto Star newspaper editor, columnist, and reporter "John Little's Who Killed Tom Thomson? is a useful addition to the ever-growing library of books that postulate answers to this compelling mystery.... Little has taken on Thomson's case like a bloodhound, passionately probing every supposition, consulting professional detectives, even hiring a scuba-diver to scour the murky bottom of Canoe Lake in search of clues and evidence.... I suspect that Canadians' fascination with the life and death of our beloved, brilliant landscape painter who died far too young, will keep journalists, filmmakers, writers, and readers forever curious."
--Peter Raymont, co-director with Michele Hozer and co-producer with Nancy Lang, of the award-winning documentary film West Wind: The Vision of Tom Thomson (White Pine Pictures)
If the item details above aren’t accurate or complete, we want to know about it. Report incorrect product info.