Why Do They Hate Us? - by Steve Slocum (Paperback) 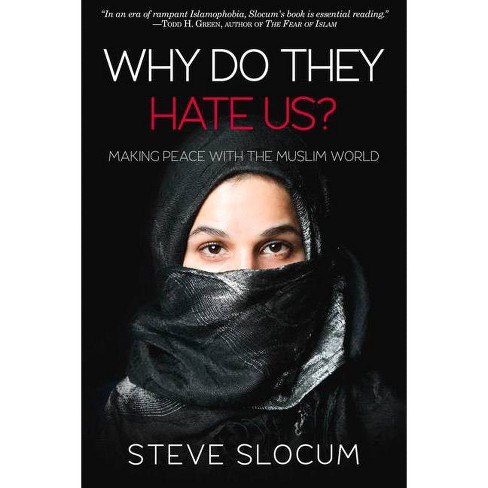 "After 9/11, the world became more fearful, and acts of terrorism were prominent in the news cycles. In Why do they hate us?, author Steve Slocum takes the spotlight off the extremists and instead exposes the heart of the everyday Muslim through Christian outreach."--From publisher's description.

With Americans still in shock after watching packed airliners slam into the twin towers, George W. Bush asked America, "Why do they hate us?" After 9/11, the world became more fearful, and acts of terrorism were prominent in the news cycles. In Why Do They Hate Us?, author Steve Slocum takes the spotlight off the extremists and instead exposes the heart of the everyday Muslim through Christian outreach. Why Do They Hate Us? brings the story of Mohammed to life and unveils the storied history of Islam with refreshing detail. Slocum clears up common misconceptions about jihad, Sharia law and the role of women in Islam. He then connects the dots for readers of all faiths between cause and effect for the rise in Islamophobia. Finally, Slocum suggests practical ways to overcome societal fears by face-to-face interaction with our Muslim neighbors. Why Do They Hate Us? is sprinkled with stories from the lives of everyday Muslims and anecdotes from Slocum's time in Kazakhstan, allowing the reader to catch a glimpse of a different side of Muslims than portrayed in the media. "Before reading this book I knew very little about Islam despite a pastoral career. I now feel like I know much more. It left me with a hunger to befriend Muslims." - Pastor Martha Freeman, M.Div.

Steve Slocum took the adventure of a lifetime when he disappeared with his family of five in the Central Asian steppe as Christian missionaries to Kazakhstan. During their five years there, they were often on the receiving end of the iconic Muslim hospitality. It left a lasting impression. Once back in the states, Slocum resumed his engineering career, but grew uneasy with the growing levels of animosity towards practicioners of Islam. In 2018, he founded Salaam, a non-religious, non-partisan nonprofit organization. Salaam's mission is creating mutual understanding between Muslims, Christians, Jews and the non-religious. Salaam's first workshop took place at All Souls' Episcopal Church in San Diego. Afterward, the rector, Rev. Joseph Dirbas, said, "In a world full of division, ignorance and hate, Salaam builds the bridge of peace with education and fellowship as we share our stories and work for the common good." Slocum is a frequent speaker at churches and civic groups, and creates awareness events, mosque visits, and other connections through Salaam. Why Do They Hate Us? is his first book.
If the item details above aren’t accurate or complete, we want to know about it. Report incorrect product info.