Widow of Gettysburg - (Heroines Behind the Lines) by Jocelyn Green (Paperback) 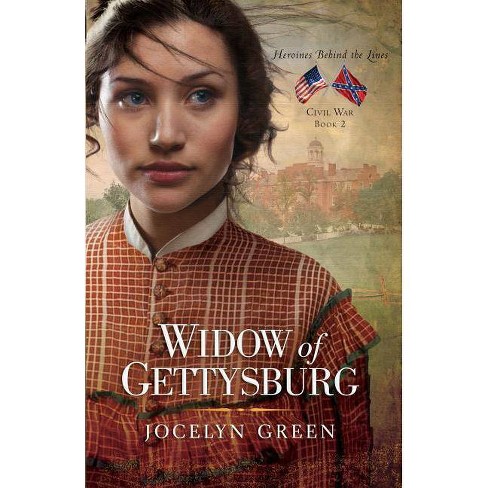 When a horrific battle rips through Gettysburg, the farm of Union widow Liberty Holloway is disfigured into a Confederate field hospital, bringing her face to face with unspeakable suffering--and a Confederate scout who awakens her long dormant heart.

For all who have suffered great loss of heart, home, health or family; true home and genuine lasting love can be found.

When a horrific battle rips through Gettysburg, the farm of Union widow Liberty Holloway is disfigured into a Confederate field hospital, bringing her face to face with unspeakable suffering--and a Confederate scout who awakens her long-dormant heart.

But when the scout doesn't die, she discovers he isn't who he claims to be.

While Liberty's future crumbles as her home is destroyed, the past comes rushing back to Bella, a former slave and Liberty's hired help, when she finds herself surrounded by Southern soldiers, one of whom knows the secret that would place Liberty in danger if revealed.

In the wake of shattered homes and bodies, Liberty and Bella struggle to pick up the pieces the battle has left behind. Will Liberty be defined by the tragedy in her life, or will she find a way to triumph over it?

Inspired by first-person accounts, Widow of Gettysburg is second book in the Heroines Behind the Lines series. These books do not need to be read in succession. For more information about the series, visit www.heroinesbehindthelines.com.

Everything is lost at the hands of the Confederate army as war rips through Gettysburg.

The farm of Union widow Liberty Holloway is confiscated by the enemy and converted into a Confederate field hospital, bringing Liberty face-to-face with unspeakable suffering. While Liberty's future crumbles, the past comes rushing back to Bella, Liberty's hired help and a former slave. Bella finds herself surrounded by Southern soldiers--and one reporter learns her secret.

In the wake of shattered homes and broken bodies, Liberty and Bella struggle to pick up the fragments the battle has left behind. Will Liberty be defined by the tragedy in her life? Or will she be able to trust God and the Confederate soldier who may not be who he seems?

Become immersed in a time when the reality of war and prejudice are met by unfailing love. [subhead]

Widow of Gettysburg is a work of fiction inspired by first-person accounts from women whose letters and journals offer a peek into the lives of women living in Gettysburg during the battle and its aftermath. This is the second book in the series Heroines Behind the Lines: Civil War, offering an inside look at women's contributions during times of war. For more information about the series, visit: www.heroinesbehindthelines.com.

"An intriguing look at the Battle of Gettysburg through the eyes of several women, I was able to read this book during the days of the battle, 150 years later. The only thing that would have made it better would have been there on the battlegrounds for the celebration.
Jocelyn Green interweaves the fictional characters' lives throughout the actual facts from women who were there and facts from research of books on the War, and I think she does it with great finesse.
Liberty, Libby as some people call her, has already lost her young husband to the war, and is in the process of turning their home into a Bed and Breakfast. One morning a young man rode up to her door and calling himself Johnny, this man had met Liberty when she was a young girl living with a woman she thought was her aunt. After riding away that day, Liberty's life became a life of horror and yet a time of learning and growing, and all the while a life of secrecy.
Silas Ford is the son of a slave owner but does not agree with his father's life. Silas starts to attending a seminary but is run off after a letter is received there claiming that Silas is something he's not. His life is intertwined with Liberty's, but will it, can it, stay that way?
Bella Jamison is a freed slave living in Gettysburg. She has secrets in her life, secrets she will go to any lengths to keep. Bella's husband is fighting for the South, in the South, but no money is coming her way. Why not?
I am not an avid history or war fan but enjoyed reading this book, mostly because of the actual accounts from women who lived through that time. The horrors some of these women had to go through are almost unimaginable. I've read enough though to know the atrocities of war are a reality. There were lots of places the accounts made me cry, some made me laugh but I never lost interest clear through. I would recommend this book to all that love history, war tales and romance."

As a supplement to any United States history curriculum, this is a great time to introduce a historical book like this because it correlates with the 150th anniversary of the Battle of Gettysburg. This book could easily be integrated into U.S. history after 1875 and pick up with some of the after effects of war. In much the same way my husband and I require our high school students to read The Diary of Anne Frank, we can now add this book to the historical literature portion of our curriculum. With a discussion guide included, Jocelyn Green makes leading open communication about this time in our history simple, allowing for encouraging and implementing independent research and investigation of the era she writes about. The best part is that it is customizable to your own schooling needs. Spend as little or as much time with this book as you wish, and you will only increase the knowledge and understanding your students have of this pivotal time in America's history!

The women of Gettysburg heard their enemy was near so many times that they began overlooking the danger. That was a few days before the Battle of Gettysburg, when the town was still little more than a spot on the map. But when their enemies finally converged on Gettysburg, the town and its people changed forever.
Liberty Holloway, a Gettysburg farm owner and Union widow is transformed when her home is defiled into a Confederate field hospital. Strangers soon take over Gettysburg, forcing Liberty to face shocking scenes of death, traumatic injury, and the untimely reawakening of her fallow heart.
Author Jocelyn Green does a masterful job juggling the different storylines that parallel Liberty's life experiences, creating an urgent desire to continue reading from one cover to the other.
Widow of Gettysburg is Book 2 in the "Heroines Behind the Lines" series and offers readers a compelling, realistic rendition of a woman's life during the Civil War.
-Michelle Lovato, CBA Retailers Magazine


"Widow of Gettysburg" by Jocelyn Green, book two of the "Heroines Behind the Lines" series, kept my interest and gave much insight into just what it was like to live on the battlefield during the Civil War. Women, children, men not involved in the armies...all these were caught in the middle during the Battle of Gettysburg. The armies overran farms, homes, businesses, fields of wheat, forests and all in the way of their cannons, horses, and troops. Those who did not want to get involved in the war certainly were involved when the war came right to their doorstep.

As frightening as it must have been to be in the middle of the bombardments from both sides, so in must have been more frightening to be present during the aftermath when so many men on both sides were killed or maimed. Civilians were pressed into service as nurses and orderlies. So many horrible sights were seen by women and children alike, free men and slaves that their dreams would haunt them for the rest of their lives.

I loved this book and was so disappointed that the book ended when it did. I am eagerly awaiting the sequel.

I thought that this book was well written and researched and I look forward to reading all in this series. "Heroines Behind the Lines" gives a powerful witness to what must have been the most horrible events of this time in our country.

JOCELYN GREEN is an award-winning author who inspires faith and courage in her readers through both fiction and nonfiction. A former military wife herself, she authored Faith Deployed: Daily Encouragement for Military Wives and co-authored The 5 Love Languages Military Edition with Dr. Gary Chapman. Her novels, inspired by real heroines on American's home front, are marked by their historical integrity and gritty inspiration. The books in the Heroines Behind the Lines Civil War series have been honored with gold and silver medals from the Military Writer's Society of America. Wedded to War was a Christy Award finalist in two categories. Jocelyn graduated from Taylor University in Upland, Indiana, with a B.A. in English, concentration in writing. She is an active member of the Christian Authors Network, the Advanced Writers and Speakers Association, American Christian Fiction Writers, and the Military Writers Society of America.Jocelyn lives with her husband Rob and two small children in Cedar Falls, Iowa. Visit her at www.jocelyngreen.com.
If the item details above aren’t accurate or complete, we want to know about it.

The Reckoning at Gossamer Pond - by Jaime Jo Wright (Paperback)

Behind the Lines - by Mary Donaldson-Evans (Paperback)

5 out of 5 stars
Would recommend
Lelia Reynolds - 2 years ago
What a beautiful story of sacrificial love of a mother for her daughter and of men and women who love country and fellow man no matter the color of skin or whether loyalty lie with north or south. This is an amazing look at the women who dealt with the aftermath of war and found inner strength they didn’t know they possessed. The historical detail is rich and the characters are admirable. To me it showed that even when we lose everything Christ steps in and makes beauty from ashes in peoples hearts. Ms. Green weaves a tapestry that has many tangled threads on the back that can look a mess but when you turn it over it becomes a beautiful work of art. This book and series needs to Grace everyone’s bookshelves. I was gifted a copy of this book. The honest review and opinions are my own and were not required.
Did you find this review helpful?