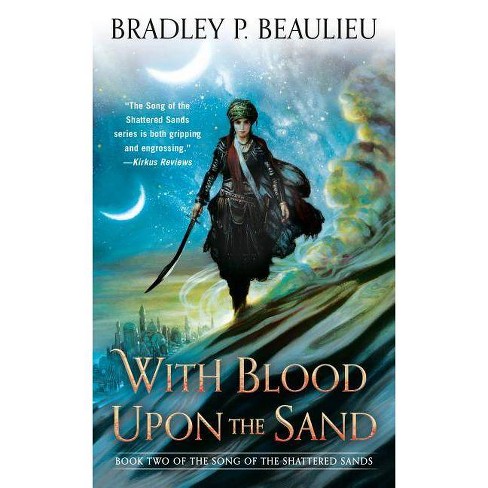 The second book in The Song of the Shattered Sands series--an epic fantasy with a desert setting, filled with rich worldbuilding and pulse-pounding action. Çeda, now a Blade Maiden in service to the kings of Sharakhai, trains as one of their elite warriors, gleaning secrets even as they send her on covert missions to further their rule. She knows the dark history of the asirim--that hundreds of years ago they were enslaved to the kings against their will--but when she bonds with them as a Maiden, chaining them to her, she feels their pain as if her own. They hunger for release, they demand it, but with the power of the gods compelling them, they find their chains unbreakable. Çeda could become the champion they've been waiting for, but the need to tread carefully has never been greater. After their recent defeat at the hands of the rebel Moonless Host, the kings are hungry for blood, scouring the city in their ruthless quest for revenge. Çeda's friend Emre and his new allies in the Moonless Host hope to take advantage of the unrest in Sharakhai, despite the danger of opposing the kings and their god-given powers, and the Maidens and their deadly ebon blades. When Çeda and Emre are drawn into a plot of the blood mage Hamzakiir, they learn a devastating secret that may very well shatter the power of the hated kings. But it may all be undone if Çeda cannot learn to navigate the shifting tides of power in Sharakhai and control the growing anger of the asirim that threatens to overwhelm her...

Praise for Twelve Kings in Sharakhai Best Book of 2015 by Amazon Barnes & Noble BuzzFeed "Çeda and Emre share a relationship seldom explored in fantasy, one that will be tried to the utmost as similar ideals provoke them to explore different paths. Wise readers will hop on this train now, as the journey promises to be breathtaking." --Robin Hobb, bestselling author of Fool's Assassin "I am impressed.... An exceedingly inventive story in a lushly realized dark setting that is not your uncle's Medieval Europe. I'll be looking forward to the next installment." --Glen Cook, author of The Black Company Fantasy and horror, catacombs and sarcophagi, resurrections and revelations: the book has them all, and Beaulieu wraps it up in a package that's as graceful and contemplative as it is action-packed and pulse-pounding. --NPR Beaulieu's intricate world-building and complex characters are quickly becoming the hallmarks of his writing, and if this opening volume is any indication, [this series] will be one of the next great fantasy epics. --B&N SF&F Blog

"Beaulieu has crafted a rich, fascinating world, filled it with compelling characters, and blended them into an epic tale that grabbed my attention on the first page and refused to let go. I look forward to more stories of Sharakhai." --D.B. Jackson, author of the Thieftaker Chronicles "Sumptuous and incredibly entertaining, Beaulieu has created memorable characters in a richly imagined world." --Michael J. Sullivan, author of The Riyria Chronicles "Beaulieu's new fantasy epic is filled with memorable characters, enticing mysteries, and a world so rich in sensory detail that you can feel the desert breeze in your hair as you read." --C.S. Friedman, author of Dreamwalker "A memorable heroine, a poetically told tale of revenge, and superb worldbuilding make Twelve Kings in Sharakhai a splendid read." --John Marco, author of The Eyes of God "Twelve Kings in Sharakhai isn't the same as the last epic fantasy you read. Like the desert sands of Sharakhai, this first volume of Beaulieu's new series is a constantly shifting narrative of betrayal and friendship, loyalty and vengeance. Leave the farm boys to their chickens and the scullions to their pots, because Çeda's bringing a knife to this fight. It's vivid and diverse, full of complex relationships, eye-opening magic, and world building for this new age of fantasy that's broken out of its medieval shackles." --Aidan Moher, A Dribble of Ink

Bradley P. Beaulieu fell in love with fantasy from the moment he began reading The Hobbit in third grade. While Bradley earned a degree in computer science and engineering and worked in the information technology field for years, he could never quite shake his desire to explore other worlds. He began writing his first fantasy novel in college. It was a book he later trunked, but it was a start, a thing that proved how much he enjoyed the creation of stories. It made him want to write more. He went on to write The Lays of Anuskaya series as well as The Song of Shattered Sands series. He has published work in the Realms of Fantasy Magazine, Orson Scott Card's Intergalactic Medicine Show, Writers of the Future 20, and several anthologies. He has won the L. Ron Hubbard Writers of the Future Award and earned a Gemmell Morningstar Award nomination. Learn more about Bradley by visiting his website, quillings.com, or on Twitter at @bbeaulieu.
If the item details above aren’t accurate or complete, we want to know about it. Report incorrect product info.