Without Protection - by Gala Mukomolova (Paperback) 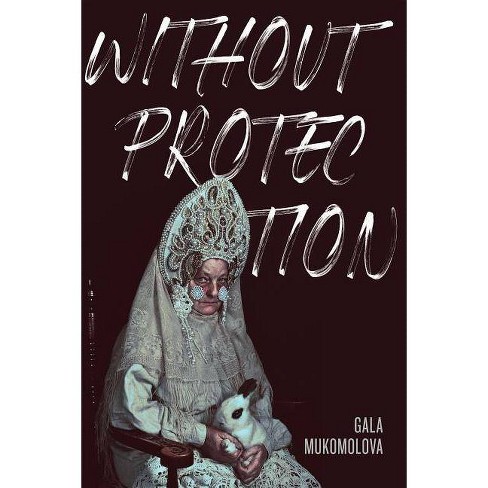 $11.59
MSRP$16.95
no reviews yet
be the first!be the first! ratings
Shipping
Free standard shipping with RedCard
Loading, please wait...
Help us improve this page

"Oh, this delicious book, this steamy, soaring documentary fairy tale! Mukomolova's erotic sensibility is refreshingly unmodified by sentimentality--raw, explicit, wounding, a hunger unmitigated by the banalities of love. She conjures lush, mythic spaces starring a queer-heroic maiden and an unappeasable witch-crone that are shot through with quotidian, retro-cool references to MySpace, Craigslist Missed Connections, and Lesley Gore's 'You Don't Own Me, ' just as her forms, improvisational, variegated, lacy, cleaved, give way to a prose line as solid as a knife-edge against stone. Mukomolova has given us a speaker whose wild embodiment is a revolt against displacement and trauma, who has the bravery to enter the witch's house without protection and sit down at her table." --Diane Seuss

"Danger and vulnerability are ever-present in this debut collection, in which the mythic and the mundane strike against each other until something wholly other, a fire or a song, ignites." --Academy of American Poets

"Without Protection is a wildly free and vulnerable collection in which no part of ecstatic, feminine pleasure or ache is taboo. The poems seem driven by a somatic urge to diverge from the constraints of one genre, instead successfully intersecting memoir, lyric experiment, fairy tale and fourth-wave feminist thought. In the ultimate act of liberation, Mukomolova has carved out a space for herself where Russian fairytales converse with the realities of being a queer, lesbian, femme, Russian immigrant who refuses invisibility and normative assimilation. Her words transport the lover, the thinker, the mystic, the muse." --Airea D. Matthews

"Grab a copy of [Mukomolova's] ferocious, ecstatic, thrumming collection, which vibrates with a divine feminine energy, an exquisite ache. Without Protection presents a femme duality: the young maiden, Vasilyssa, and the old crone, Baba Yaga, who sit together, in opposition, in tandem, and explore the terrors and wonders of the world. It's a feverish take on a fairy tale, and its ferocity lingers long after you've read the collection's last words." --Nylon

"A raw, unfiltered glimpse of different aspects of her world--which includes the beautiful, the vulnerable, and the sordid." --Prism Review

"A young woman named Vasilyssa--buffeted by the brutal vestiges of tradition, by the animal frustrations of the body--sits at a table belonging to Baba Yaga, a fearsome witch-crone. For many of us, the encounter that follows may seem familiar. There is a conversation about the soul and its motives; differences dissolve; the younger flees, the elder pursues. The folklore proposes: how do we persist, undiminished, while seated across from someone who holds the power to be both donor and destroyer? Like Gala Mukomolova, I am also a queer reader of this tale; like her (and Vasilyssa), I have studied every exit before sitting down to speak. And in Without Protection, the poems unfurling from Vasilyssa's original challenge, in all their elegant ferocity, have shown me the back door I have always wished for. They have given me permission to leave the kitchens where I feel trapped, to wear the lace, to unbottle the secret, to call someone I both love and fear just so they can listen to me hang up the phone." --Benjamin Quinn, Harvard Book Store

"Gala Mukomolova's Without Protection is the world in its gorgeous terror and beauty, the world made whole, which is to say: the world as it is with its poverty, cruelty, and its crushing apathy. A world of wheelchairs, television screens, and Xanax. This collection shows both the internal and the external: the world of appearances and the roving whirr of the mind, the work of the intellect and the body covered in sweat and blood, the products made by these hands (sliced meat, a cup of tea, and this collection of poems itself) and the labor necessary to sustain a life in which such things can be made. Constructed from an archive of fragments (ephemera, email, voicemail), fairy tale, and stories, Mukomolova makes a world from the disparate scraps of a life lived, a world that she can embody. As she writes, 'I built a self outside my self.' Without Protection is the triumphant arrival of a new and important voice." --Cynthia Cruz

"Gala Mukomolova's a Baltic Sea witch, and her poems are vulnerable, ferocious, sex-soaked, gems sharp-edged enough to cut. For Mukomolova, names are spells, and all the thousand shapes of love are Without Protection's fierce gravity. 'Love made a clearing in the night where/a girl's will tamped down the grass.' Sometimes, the speaker is a teenage girl who laughs and fights and curses into the hot eye of the storms that pursue her ('What wasn't dangerous?') Sometimes, the speaker is a woman abandoned by a lover: hungry, desirous, despairing, suspicious, hilarious. Throughout, we trace Vasilyssa's brave path through a perilous forest; 'If there is a kingdom then Vasilyssa comes.' 'Goddess! Give me money!' the old babas of Brighton Beach cry at the graves of their dead, and we all rejoice together." --Gina Balibrera Amyx

"Gala Mukomolova's poems turn the volume of language up high and shake the cages of what has become our brutal ordinary. Her poem rattle us into what for me is a kind of beautiful profane, laying bare the complications of desire and simultaneously exposing personal and cultural wound. Hers in a poetry that refuses cloak in favor of reveal. And in pulling back the curtains, Mukomolova provides a tender cultural redress. These poems are a contemporary pulse, a vigilant all-seeing eye." --Dawn Lundy Martin