Without You - by Anthony Rapp (Paperback) 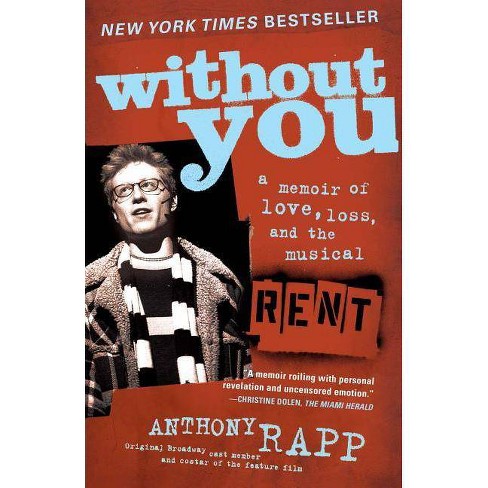 In this lovingly crafted memoir that captures the passion and grit unique to the performing life, Rapp recounts his life-changing experience as an original cast member in the Pulitzer Prize-winning "Rent." of photos.

The New York Times bestselling memoir of Anthony Rapp, star of Broadway's Pulitzer Prize-winning musical Rent. Anthony Rapp had a special feeling about Jonathan Larson's rock musical Rent as early as his first audition, which won him a starring role as the video artist Mark Cohen. The Pulitzer Prize-winning Rent opened to thunderous acclaim off-Broadway--but even as friends and family were celebrating the show's first success, they were also mourning Jonathan Larson's sudden death from an aortic aneurysm. And when Anthony's mom began to lose her battle with cancer, Anthony found himself struggling to balance his life in the theater with his responsibility to his family. In Without You, Anthony tells of his exhilarating journey with the cast and crew of Rent as well as the intimacies of his personal life behind the curtain. Marked by fledgling love and devastating loss, Without You is an exceptional memoir of the world of theater, the love of a son for his mother, and maturity won far too early.

Beautifully written...[Without You] shows that a life story truthfully told can be stranger (as well as more touching) than fiction. -- William Georgiades, New York Post

The tragic, compelling back story to Rent extends the book's appeal far beyond the show's fans. -- Web Behrens, Chicago Tribune

Anthony Rapp has been acting professionally since he was nine years old. He's best known for originating the role of Mark Cohen in Jonathan Larson's Pulitzer Prize-winning landmark rock opera Rent, taking the show from off Broadway to Broadway, Chicago, and London. He shared an OBIE Award with the rest of the original cast for his performance. He has appeared in numerous films, including Adventures in Babysitting, Dazed and Confused, the Oscar-winning A Beautiful Mind, and, most recently, the film adaptation of Rent. In 2000, he released his debut album, Look Around. He lives in New York City with his partner, Rodney To, and their three cats, Emma, Sebastian, and Spike. This is his first bo
If the item details above aren’t accurate or complete, we want to know about it. Report incorrect product info.