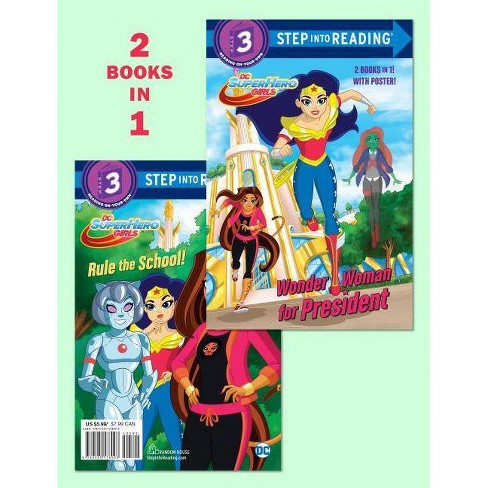 Wonder Woman(TM) and her frenemy, Cheetah(TM), go toe to claw in this flip-it leveled reader--with two stories in one book, featuring the DC Super Hero Girls(TM)! On one side of this two-in-one leveled reader, the fur flies when Wonder Woman and her frenemy, Cheetah, run for student body president. Then flip the book over to find out what makes Cheetah Super Hero High's favorite ferocious feline. Get your cape on with the DC Super Hero Girls(TM)--the unprecedented new Super Hero universe especially for girls! Readers of all ages can fly high with the all-new adventures of Wonder Woman(TM), Supergirl(TM), Batgirl(TM), and some of the world's most iconic female super heroes as high schoolers! Step 3 books are longer and slightly more difficult than Step 2 books, with text assists through context cues or illustrations.

SHEA FONTANA is a writer living in Los Angeles. Her credits include DC Super Hero Girls animated shorts and movies, Doc McStuffins (Disney), The 7D (Disney), Whisker Haven Tales with the Palace Pets (Disney), the upcoming live-action feature film Crowning Jules, and the upcoming graphic novel DC Super Hero Girls: Finals Crisis. She is the story editor on the upcoming Dorothy and the Wonders of Oz series for Warner Bros.
If the item details above aren’t accurate or complete, we want to know about it. Report incorrect product info.