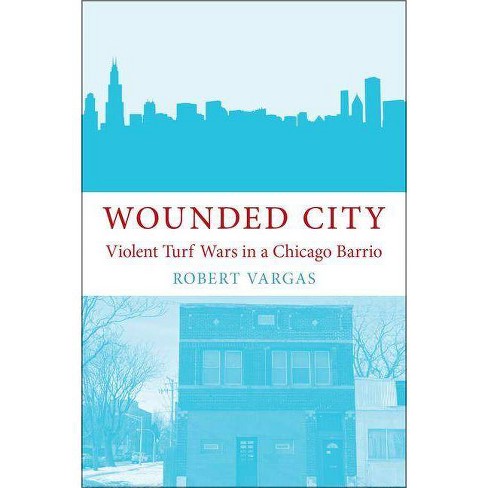 "Wounded City is one of the most important books about urban violence that has been published in a long time. In a style that is engaging and insightful, Robert Vargas pushes the reader to consider why some communities are highly organized against violence while others are not, and shows that the answer lies in the intersection between politics, institutions and residents." - Patrick Sharkey, author of Stuck in Place

"Wounded City is extraordinarily bold and smart. Through meticulous research, Vargas uncovers the precise points at which relationships go bad and the blame game for urban violence begins. Vargas exposes a system that breeds competition rather than cooperation, and turf wars among and between the most dispossessed and the most powerful. This book should fundamentally change both the study of and the interventions against crime in the city." - Mary Pattillo, Harold Washington Professor of Sociology and African American Studies, Northwestern University
"Street gangs and politicians both spend their time protecting turf. In Chicago, sometimes the boundaries between a gang's turf and the politician's turf are a bit hazy. Wounded City dives deeply into the intersection of politics and street gangs as one Latino community navigates the social and political boundaries of its own health and safety. Vargas masterfully describes how gang leaders, politicians, and community members negotiate and create their social order through the use of violence, unsuspecting alliances, community organizing, and federal grants." - Andrew V. Papachristos, Associate Professor of Sociology, Yale University
"Vargas, a diligent ethnologist at the Univ. of Notre Dame, made Little Village the study site for five field workers and himself. The author writes mostly about the corporatist Latin Kings, who control much of the neighborhood studied. Speaking Spanish and playing basketball with the Kings, Vargas came to understand what engenders persistent criminality in Little Village." - CHOICE
"This book is very important for several reasons. First, the author uses multiple methods in carrying out an ingenious new study. Second, the research was conducted in a gang hotspot (the west-side Little Village community) in Chicago, which often is considered the gang capital of the United States. Third, it draws attention to the ongoing conflicts in Little Village among self-help indigenous community organizations, gangs, politicians, and police. Fourth, it provides valuable insights into gang-police relations. Fifth, it is very well written." - James C. Howell, Criminal Law and Criminal Justice Books Review, Rutgers University