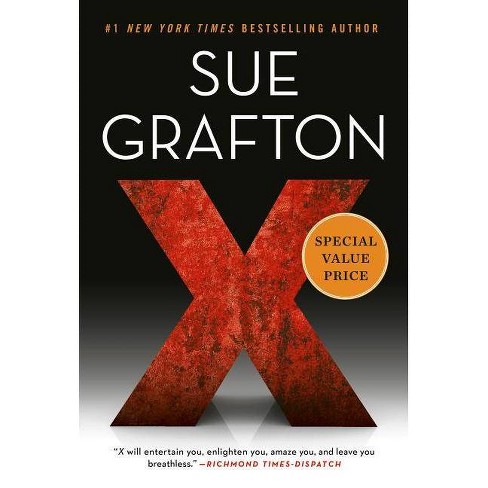 Praise for X "Grafton's endless resourcefulness in varying her pitches in this landmark series, graced by her trademark self-deprecating humor, is one of the seven wonders of the genre."--Kirkus Reviews (starred review) "Excellent...pulse-pounding...Grafton has never been better."--Booklist (starred review) "Ratcheting up the heat as she heads toward the finish line of her alphabetically-framed series, Grafton has turned in a corker of a novel with X, upping her already high-level game."--The Boston Globe "X features a smashing ending that rivals that of her debut, A is for Alibi."--The Washington Post More Praise for Sue Grafton and the Alphabet Series "I'm going to miss Kinsey Millhone. Ever since the first of Sue Grafton's Alphabet mysteries, A Is For Alibi, came out in 1982, Kinsey has been a good friend and the very model of an independent woman, a gutsy Californian P.I. rocking a traditional man's job...it's Kinsey herself who keeps this series so warm and welcoming. She's smart, she's resourceful, and she's tough enough to be sensitive on the right occasions."--New York Times Book Review "The consistent quality and skillful innovations in this alphabet series justify all the praise these books have received over the past 35 years."--Wall Street Journal "A superb storyteller."--Publishers Weekly "Grafton is a writer of many strengths--crisp characterizations, deft plotting, and eloquent dialogue among them--and she has kept her long-running alphabet mystery series fresh and each new release more welcome than the last."--Louisville Courier-Journal "[Grafton's] ability to give equal weight to the story of the detective and the detective story sets her apart in the world of crime fiction."--Richmond Times-Dispatch
If the item details above aren’t accurate or complete, we want to know about it. Report incorrect product info.