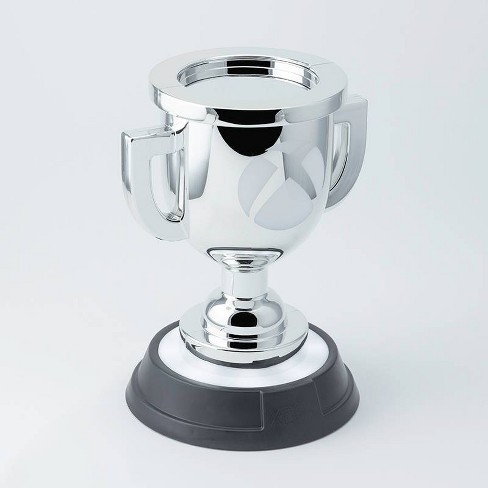 The silver trophy shaped light features the Xbox logo on the front, which upon turning the LED lamp on, glows a vibrant white light. Simply press the button at the back of the base for the light display to show. For added fun, the light comes with three modes: always on, phasing mode, and a final mode that displays the light circling the Xbox logo. At 21cm (8.3"") tall, the light makes a great addition to any gamer's room. The Xbox Trophy Light is powered by USB cable (included) or 2x AA batteries (not included).

Xbox is a world famous video game brand owned by Microsoft that has released a some incredibly successful games consoles. The original Xbox was released in 2001, with its successor the Xbox 360 hitting shelves in 2005, and the most recent Xbox One coming out in 2013. The Xbox consoles have played host to some of the most popular video games of all time including some Xbox exclusives such as the Halo series. The Xbox products are some of the most loved video game consoles of all time and currently over 40 million people use the Xbox online service worldwide.

The Xbox Trophy Light is an officially licensed Xbox product.
If the item details above aren’t accurate or complete, we want to know about it. Report incorrect product info.