Yes, I'm Hot in This - by Huda Fahmy (Hardcover) 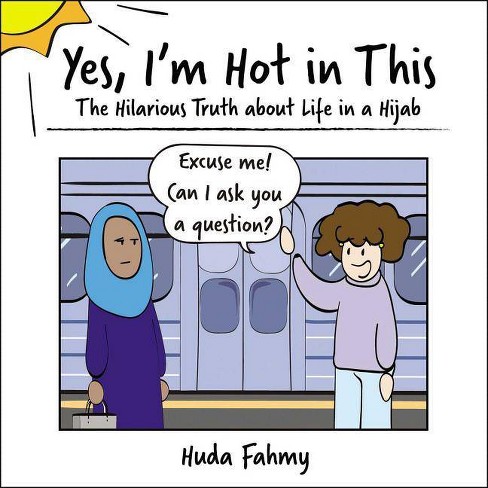 Popular Instagram cartoonist and Muslim-American Huda Fahmy presents a hilarious, relatable, and painfully honest new collection of comics that break down barriers and show how universal our everyday problems, worries, and joys actually are. At some point in our lives, we've all felt a little out of place. Huda Fahmy has found it's a little more difficult to fade into the crowd when wearing a hijab. In Yes, I'm Hot in This, Huda navigates the sometimes-rocky waters of life from the unique perspective of a Muslim-American woman, breaking down misconceptions of her culture one comic at a time. From recounting the many questions she gets about her hijab every day (yes, she does have hair) and explaining how she runs in an abaya (just fine, thank you) to dealing with misconceptions about Muslims, Yes, I'm Hot in This tackles universal feelings from an point of view we don't hear from nearly enough. Every one of us have experienced love, misunderstanding, anger, and a deep desire for pizza. In Yes, I'm Hot in This, Huda's clever comics demonstrate humor's ability to bring us together, no matter how different we may appear on the surface.

"Yes, I'm Hot in This doesn't shy away from the differences between some Muslim-American experiences and the rest of the population, but it does go to great lengths to make those experiences part of the human condition." -- "Houston Chronicle"

"Yes, I'm Hot in This is hilarious, honest, and will show you how alike all humans actually are." -- "HelloGiggles"

"Yes, I'm Hot in This tackles universal feelings from an point of view we don't hear from nearly enough ... Huda's clever comics demonstrate humor's ability to bring us together, no matter how different we may appear on the surface." -- "Ashley Karlen"

"A gift for all the well-meaning but clueless people in your life; it tackles serious topics with humor and grace." -- "Muslim Reads"

"Nothing unites us quite like comedy. Dive into another perspective with this delightful collection of comics from Huda Fahmy about the realities of wearing a hijab and some of the ridiculous questions she gets asked about it." -- "CulturedVultures"

"The book does something an Instagram account simply cannot, which is provide a continuous narrative that flows seamlessly (and humorously) through every emotion experienced by the modern woman wearing hijab. Fahmy illustrates her experiences with amiable, unreserved honesty. The book is an incredibly enjoyable read, too... .Fahmy manages to express all of the struggles she experiences with unabashed zest ... at the same time, she asserts that she isn't defined by these struggles." -- "Haute Hijab"

"This book was pretty wonderful ... a very realistic, raw, and true commentary on the world today regarding how many Americans treat other cultures unfairly." -- "Reader Fox"
If the item details above aren’t accurate or complete, we want to know about it. Report incorrect product info.