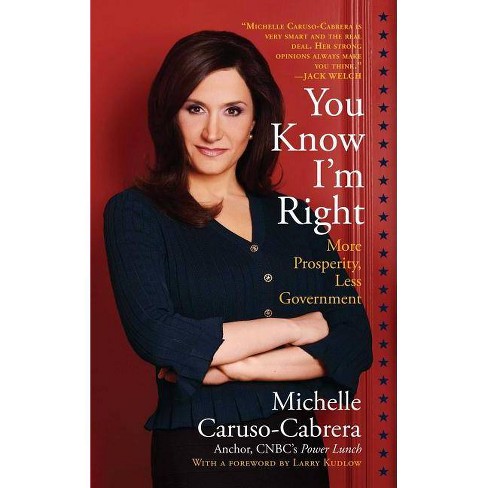 $14.79
no reviews yet
be the first!be the first! ratings
Shipping
Free standard shipping with RedCard
Loading, please wait...
Help us improve this page

Now in paperback from straight-talking CNBC reporter Michelle Caruso-Cabrera--a modern solution to our nation's social and economic woes involving a return to our political roots: fiscal conservatism, limited government, and personal accountability. Hypocrites and radicals on both sides of the political spectrum have left fiscally conservative, socially liberal Americans like CNBC's Michelle Caruso-Cabrera without a party. If you tell your neighbors you're a card-carrying Republican, they'll assume you're opposed to abortion, hostile to gay marriage, and don't care about the environment or the poor. Democrats are portrayed as union-loving, tree-hugging activists, more concerned with making government big rather than effective. The reality is that both parties have been hijacked by the wrong issues and have abandoned the loyal Americans who believe that government should stay out of our private lives and out of our pocketbooks. In the smart, tell-it-like-it-is style that has made her popular with Democrats and Republicans alike, Caruso-Cabrera outlines forward-thinking free-market solutions for health care, education, and immigration. These ideas will stop our growing deficit, boost our competitive capital, and strengthen our dollar, because an economy that is flexible and free of government interference can grow faster and get the country out of its current malaise. It's not too late to fix our nation, restore our credibility, and rebuild our political system with the tenets on which it was founded: fiscal conservatism and social liberty. Our future is counting on it.
If the item details above aren’t accurate or complete, we want to know about it. Report incorrect product info.