Your Life Has Been Delayed - by Michelle I Mason 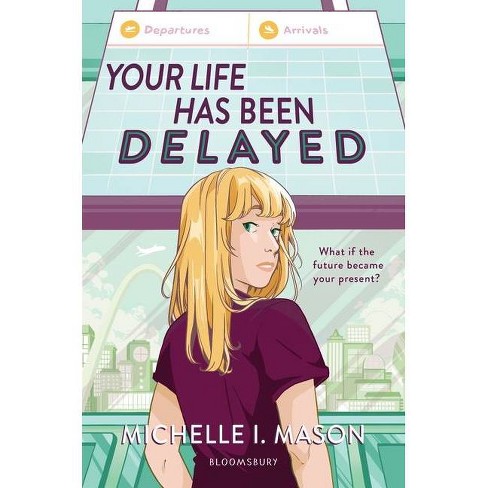 In 1995, seventeen-year-old aspiring journalist Jenny is flying back home to St. Louis when her plane mysteriously lands in the year 2020.

How do you move forward when your entire life is stuck in the past? In this captivating YA debut, Michelle I. Mason tells the story of a girl who takes off on a flight and lands...twenty-five years later.

After visiting her grandparents in New York City, Jenny Waters is ready for the perfect senior year. She's going to hang out with her best friend Angie, finally kiss her new boyfriend Steve, and convince her parents to let her apply to Columbia so she can become an award-winning journalist. But when her plane lands in St. Louis, Jenny and the other passengers are told their plane vanished into thin air. . . and then reappeared twenty-five years later. Suddenly, it's not 1995 anymore. Everyone in Jenny's life has spent the last twenty-five years mourning her death. Jenny has missed two decades of pop culture, and her high school is practically unrecognizable. Learning about cell phones and social media is difficult enough, but the unexplainable mystery of the flight has also thrust Jenny's entire life into the spotlight--which makes it extra-complicated when Jenny falls for a cute, kind classmate with an unusual connection to her past. Can Jenny figure out a way to move forward, or will she always feel stuck in the past?

"With its intriguing premise and approachable first-person narrative, this page-turner encourages readers to appreciate the now." --Publishers Weekly

Michelle I. Mason lives in St. Louis with her family. She spent ten years as a PR manager (she hasn't covered time travel-yet-but has promoted everything from forklift rodeos to hotel olympics) before shifting her focus to fictional stories. When she isn't writing novels, she enjoys reading, watching too much TV, cross-stitching, baking amazing brownies, playing the violin, and remembering her favorite pop culture moments from 1995.

michelleimason.com
@MichelleIMason
If the item details above aren’t accurate or complete, we want to know about it.

Almost There (a Twisted Tale) - by Farrah Rochon (Hardcover)

Your Life Has Been Delayed - by Michelle I Mason (Paperback)

My Second Impression of You - by Michelle I Mason (Hardcover)

You're Not Alone - by Michelle Dana Mason Fulton (Paperback)