Above the Rim - by Jen Bryant (Hardcover) 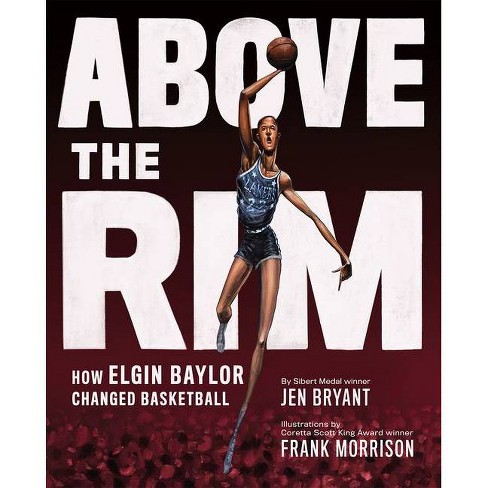 "Though not as widely known as other basketball legends, hall-of-famer Elgin Baylor was one of the game's all-time greatest players-an innovative athlete, team player, and quiet force for change. A member of the early, scrappy NBA and one of the first professional African American players, Elgin (b. 1934) played in the late 1950s and early 1960s for the Minneapolis/Los Angeles Lakers, taking risks on and off the court. Known for his acrobatic style of moving and shooting, he inspired others to get creative with their game. But when traveling for away games, hotels and restaurants weren't as welcoming of Elgin as they were of his white teammates. Together, Elgin and his teammates boycotted places practicing segregation until the entire NBA followed suit. From picture book powerhouses Jen Bryant and Frank Morrison, Above the Rim is a peek into the early days of the NBA, a poetic telling of the life of an under-known athlete, and a celebration of standing up for what is right"--

Winner of 2021 Orbis Pictus Award! The story of Elgin Baylor, basketball icon and civil rights advocate, from an all-star team Hall-of-famer Elgin Baylor was one of basketball's all-time-greatest players--an innovative athlete, team player, and quiet force for change. One of the first professional African-American players, he inspired others on and off the court. But when traveling for away games, many hotels and restaurants turned Elgin away because he was black. One night, Elgin had enough and staged a one-man protest that captured the attention of the press, the public, and the NBA. Above the Rim is a poetic, exquisitely illustrated telling of the life of an underrecognized athlete and a celebration of standing up for what is right.

"Frank Morrison's oil illustrations work perfectly to display the beauty of Baylor's fluid, "above the rim" style of play. Through his palette and extraordinary depiction of light, Morrison, highlights the beauty of Black skin--and the importance of figures like Elgin Baylor." --Shelf Awareness

"Morrison's captivating oil on board scenes sear Baylor's tale into eyes and memories. The artist's signature long-and-lanky character styling is the perfect match, with the flying tangle of airborne legs a glorious theme for his disciplined composition, and the elegant stature of Baylor himself underscoring his dignified, principled protest."--Bulletin of the Center for Children's Books

"With Baylor's story, Bryant and Morrison demonstrate that NBA players have a long history of speaking (or, in Baylor's case, sitting) out against injustices in society. Bryant's spare, emphatic text relates how Baylor's Minneapolis Lakers were affected by Jim Crow and how his protest led to a change in NBA policy. Morrison's vibrant paintings emphasize Baylor's lithe athleticism, elongated arms and legs extending balletically."--Kirkus Reviews

Jen Bryant writes picture books, novels, and poems for readers of all ages. Her numerous awards include two Caldecott Honors, two ALA Schneider Family Book Awards, an NCTE Orbis Pictus Award and Honor, and a Sibert Medal and Honor. Frank Morrison is the award-winning illustrator of many books for young readers, including two Coretta Scott King Illustrator Honor books, a John Steptoe New Talent Award winner, an NAACP Image Award winner, and a Society of Illustrators Silver Medal winner.
If the item details above aren’t accurate or complete, we want to know about it.

I Will Dance - by Nancy Bo Flood (Hardcover)

Outside in - by Deborah Underwood (Hardcover)

Who Is Michael Jordan? - (Who Was...?) by Kirsten Anderson (Paperback)

A Splash of Red: The Life and Art of Horace Pippin - by Jen Bryant (Paperback)