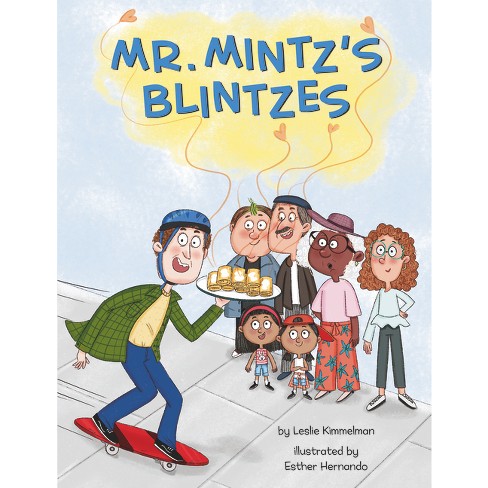 A story for the Jewish spring holiday of Shavuot about Mr. Mintz, who often helps his friends around the neighborhood. Every year, Mr. Mintz likes to make and share delicious blintzes with his friends, but when he hurts his leg and is unable to cook, what will become of the blintzes?

Mr. Mintz is famous in his neighborhood for cooking up cheesy, gooey, and delicious blintzes. Each spring he shares them with his friends to celebrate to celebrate the holiday of Shavuot. But when he hurts his leg in a skateboarding accident and is unable to cook, what will become of the blintzes?

Join in as Mr. Mintz's neighbors collaborate to return the kindnesses he has so generously distributed to them over the years.

An author's note for families includes a short explanation of the Jewish holiday of Shavuot.

The neighborhood blintz maker is injured right before the blintz holiday, Shavuot.

Mr. Mintz (light-skinned, with a curly ginger mop) is a neighborly gent. He carries groceries, puts out milk for the cats, and, most importantly, is always there with a bite to eat. A "marvelous cook," Mr. Mintz gives away most of what he prepares to his neighbors.--soup for the sniffly, latkes on Hanukkah, challah for Shabbat, and gooey, tasty blintzes for the spring holiday of Shavuot. But the day before Shavuot, Mr. Mintz takes a tumble off his skateborad. he's going to be OK, but who will make the "cheesy, and apple-y . . .gooey and delicious" blintzes for the neighborhood? Why, the neighbors, of course! When Mr. Mintz returns from the hospital on crutches, his neighbors are all there to bring him hot tea, kittens, --and blintzes. Mr. Mintz's neighbors, nameless and lacking in cultural markers, have a wide variety of skin tones and facial features in the cartoon art. It's up to the reader to decide whether this gentle, community-minded tale depicts a racially diverse Jewish neighborhood, a neighborhood where people are happy to celebrate other cultures' traditions, or both. An author's note provides a two-sentence reference for the religious aspect of the holiday, but returns to the focus on food with a blintz recipe. (This book was reviewed digitally)

Every-one in the neigh-bor-hood loves Mr. Mintz. He's friend-ly,
gen-er-ous, and help-ful; he remem-bers everyone's birth-day, rakes leaves, and
shov-els snow when need-ed; he brings home-made soup to a sick neigh-bor
and deliv-ers latkes on Hanukkah and chal-lah on Shab-bat. But Mr. Mintz is
most famous for his sweet and savory, gooey and deli-cious Shavuot blintzes.
When he breaks his leg skate-board-ing just before the hol-i-day, his neigh-bors
sur-prise him by work-ing togeth-er to make the blintzes.Cute, expres-sive car-toon illus-tra-tions depict
a diverse con-tem-po-rary neigh-bor-hood, with added speech bub-bles used
to enhance the text. The text men-tions that ​"Shavuot cel-e-brates the
giv-ing of the Torah to the Jew-ish peo-ple," and the append-ed author's note
fur-ther explains that ​"because the Torah is said to be nour-ish-ing,
like milk, many peo-ple cel-e-brate Shavuot by eat-ing dairy foods such as
cheese, ice cream, and blintzes."
The strength of Mr. Mintz's Blintzes is in how it
illus-trates in a fun way the Jew-ish val-ues of chesed (kind-ness)
and vis-it-ing the sick. There are sim-i-lar ver-sions of the sto-ry told about
oth-er times of year in pic-ture books, some exam-ples being The Cholent
Brigade by Michael Her-man, illus-trat-ed by Sharon Harmer (Kar-Ben, 2017), Chik
Chak Shab-bat by Mara Rock-liff, illus-trat-ed by Kyrsten Brook-er (Can-dlewick, 2016),
and The Bagel King by Andrew Larsen, illus-trat-ed by Sandy Nichols
(Kids Can Press, 2018). --Michal Malen, The Jewish Book Council