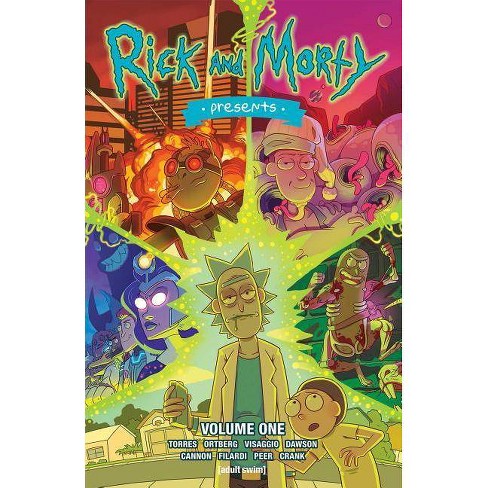 Volume one written by J. Torres, Daniel Mallory Ortberg [and others]; illustrated by CJ Cannon; colored by Nick Filardi [and others]; lettered by Crank!.

Learn the secret stories and hidden pasts of your favorite Rick and Morty characters in Oni Press's RICK AND MORTY PRESENTS! These 4 oversized comics, collected here for the first time, focus on fan-favorite characters and storylines, with writing and art from today's top talent! Each story is illustrated by series artist CJ Cannon, with Nick Filardi and Brittany Peer. From writer J. Torres (Teen Titans Go!, BroBrots), delve into the secret history of THE VINDICATORS! Writer Daniel Mallory Ortberg (co-founder of The Toast) tells the tale of KROMBOPULOS MICHAEL, the professional assassin who just loves killin'. Writer Magdalene Visaggio (Kim & Kim, Eternity Girl) wonders if it matters that SLEEPY GARY's a mind-altering parasite, if it makes Jerry...happy? And writer Delilah S. Dawson reimagines the Emmy award-winning episode PICKLE RICK.

Magdalene Visaggio is the Eisner and GLAAD Media Award-nominated writer behind Kim & Kim, Eternity Girl, Dazzler: X Song, Transformers vs Visionaries, and Morning in America. A lifelong comics reader, she studied English at Virginia Commonwealth University and did graduate work in Ethics & Moral Theology at Seton Hall before dropping out to focus on writing comics where people hit each other with guitars. When not writing, she's probably passed out on her couch at three in the morning with a cat on top of her while Netflix asks if she wants to continue watching Star Trek: The Next Generation. She lives in Manhattan. J. Torres is a comic book writer orbiting near Toronto, Canada. His other writing credits include Do-Gooders, How to Spot a Sasquatch, BroBots, Teen Titans Go, and The Mighty Zodiac. His favorite princesses are Disney's Snow White, Mononoke, The Paperbag Princess, Starfire, and Wonder Woman. Delilah S. Dawson is the New York Times best-selling author of Star Wars: Phasma and the writer of the Blud series, the Hit series, Servants of the Storm, and the Shadow series, starting with Wake of Vultures and written as Lila Bowen, not to mention numerous short stories. With Kevin Hearne, she co-writes the Tales of Pell beginning with Kill the Farm Boy. She writes the creator-owned comics Sparrowhawk and Ladycastle and has written comics in the worlds of Adventure Time, Labyrinth, The X-Files Case Files, Star Wars Adventures, and Star Wars Forces of Destiny. She has won three RT Awards and has received stars from Publishers Weekly, Kirkus, Booklist, VOYA, and Library Journal. She lives in Florida with her family and is always online at whimsydark.com. CJ Cannon is a self-taught artist living in Nashville, Tennessee. When they're not working on comics, outside riding their bike, or drumming, they're almost always in the house drawing fanart.
If the item details above aren’t accurate or complete, we want to know about it. Report incorrect product info.