Tears for Water : Songbook of Poems And Lyrics - Reprint by Alicia Keys (Paperback) 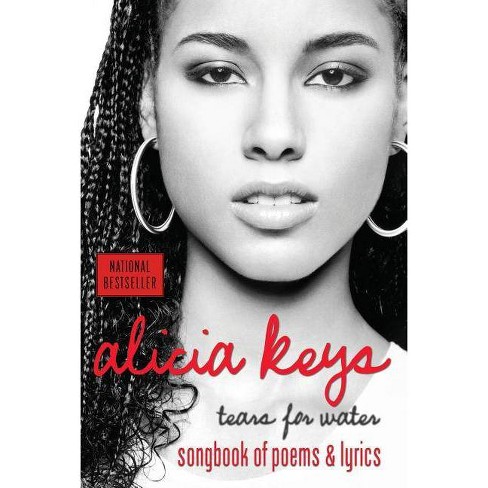 Fans are treated to never before published intimate poems from Keys' journal and lyrics from her multi-platinum Grammy-Award-winning CDs, "Songs in A Minor" and "The Diary of Alicia Keys." (Music)

From acclaimed musician Alicia Keys, author of the memoir More Myself, comes a revealing songbook of collected poems and lyrics that document her growth as a person, a woman, and an artist. "All my life, I've written these words with no thought or intention of sharing them. Not even with my confidants. These are my most delicate thoughts. The ones that I wrote down just so I could understand what in the world these things I was thinking meant..." When she burst onto the music scene with her multi-million bestselling, Grammy(R) Award-winning first album, Songs in A Minor, Alicia Keys became a superstar. Two decades later, her career has expanded into producing, acting, and passionate activism--winning her worldwide acclaim, numerous awards, and a spot on Time's list of "The 100 Most Influential People." Though Alicia has been very vocal through her career, there were always "delicate thoughts" that she never before imagined she'd share with anyone else--until now. In Tears for Water, Alicia Keys opens the journals and notebooks that she has kept throughout her life and reveals her heart to her fans in return for all the love they have shown to her and her music. Hello morning
now I see you
cause I am awake
What was once so sweet and secure
has turned out to be fake
Girl, you can't be scared
gotta stand up tall and let 'em see what shines in you
Push aside the part
lying in your heart
like the ocean is deep, dark and blue --from Golden Child

Alicia Keys is a modern-day Renaissance woman--a 15-time Grammy Award-winning singer/songwriter/musician/producer, an accomplished actress, a New York Times bestselling author, a film, television, and broadway producer, an entrepreneur, and a powerful force in the world of activism. Since the release of her monumental 2001 debut album, songs in A minor, Keys has sold over 30 million records and built an unparalleled repertoire of hits and accomplishments. Keys resides in the New York City area with her husband, producer/visionary and entrepreneur Swizz Beatz, and their children.
If the item details above aren’t accurate or complete, we want to know about it.

Wildly into the dark : typewriter poems and the rattlings of a curious mind (Hardcover) (Tyler Knott Gregson)

I'll Give You the Sun (Reprint) (Paperback) by Jandy Nelson

5 out of 5 stars
Would recommend
MrsK2019 - 11 months ago
A Golden Keepsake of Ms Keys Best Selling Songs, during the time of book printing, and even more poems that never turned musical words. If you get the chance to obtain a copy, cherish it… Forever.
Did you find this review helpful?