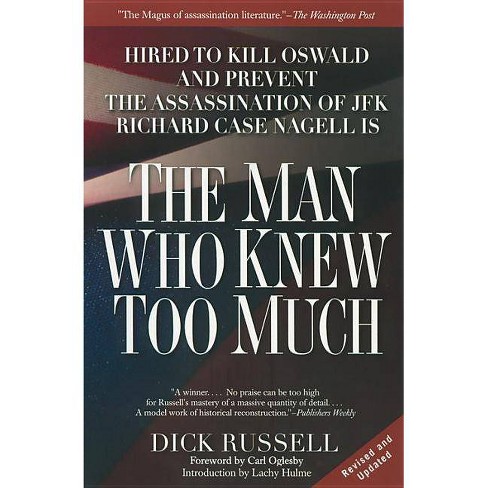 On the 40th anniversary of the JFK assassination comes the fascinating story of Richard Case Nagell, the man hired to kill Lee Harvey Oswald, revised and expanded with a decade's worth of new declassified information.

Carroll and Graf has been in the forefront of producing books about the Kennedy assassination. It has come up with a winner in this mammoth study of one of the most mysterious figures on the fringes of the assassination: Richard Case Nagell, described as the man 'hired to kill Oswald and prevent the assassination of JFK.' On the fourtieth anniversary of the JFK assassination, this amazing story has been revised and expanded with a decade's worth of new classified information. Nagell's own death in 1995 was suspicious. Here, freelance investigative journalist Dick Russell delves deep into Nagell's strange past, revealing that Nagell had been a contact for both the CIA and KGB at different times. The author's detailed and expert reconstruction of historic events will have readers wonder and question new possible leads never before imagined in this still unsolved murder.

"No praise can be too high for Russell's mastery of a massive quantity of detail, for his determination to seek out primary sources and for his refusal to overdramatize. This is a model work of historical reconstruction that should, as Norman Mailer suggests in a blurb, open up many hitherto unperceived leads in the case."

Dick Russell is the author of thirteen books, including four books coauthored with former Minnesota Governor Jesse Ventura that spent weeks on the New York Times bestseller list. The Man Who Knew Too Much, about a conspiracy to assassinate President Kennedy, was hailed as "a masterpiece of historical reconstruction" by Publishers Weekly.
If the item details above aren’t accurate or complete, we want to know about it.

The Spy Who Knew Too Much - by Howard Blum (Hardcover)

The Spy and the Traitor - by Ben Macintyre (Paperback)

The Reporter Who Knew Too Much - by Mark Shaw

The Man Who Knew Too Much - (Mint Editions (Crime, Thrillers and Detective Work)) by G K Chesterton (Hardcover)

The Man Who Knew Too Much - by G K Chesterton (Paperback)

The Life and Ideas of James Hillman - by Dick Russell (Hardcover)