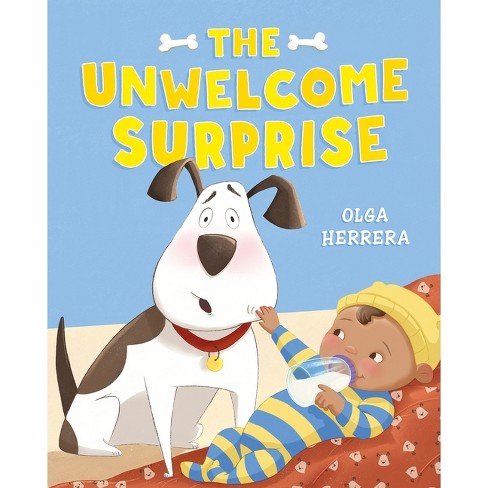 A hilarious and endearing debut picture book about a dog whose daily routine is disrupted when he encounters a monstrous surprise in the living room.

Perfect for fans of Something's Wrong! and Can I Be Your Dog?, this charmingly funny new baby story by debut author/illustrator, Olga Herrera, explores the fears and joys that come with change.

Every morning, Bongo walks downstairs to get his food, passing his dried-up potted plant, his old stained chair, and his stinky stained carpet. Until one morning...something is different! Something monstrous is in his way! Bongo is beside himself with worry; will it take his walks? What if it eats his food? Or even worse...what if it takes his family?!

Olga Herrera was born in Miami, Florida, to a Cuban mother and an Ecuadorian father. She grew up in Ecuador and returned to the United States as a teenager. She earned her bachelor's of Fine Arts from the Ringling College of Art and Design, in Sarasota, Florida, with a major in Illustration, graduating with honors in 2003. She began her career as an illustrator; using traditional media, and sculpture. As her career progressed she fell in love with digital illustration and narrative storytelling. Now, she writes her own stories to illustrate, inspired by quirky characters and situations in her life. She lives in Southern Maryland with her husband, two children, two dogs, a bearded dragon, Kiwi the parakeet, and many fat goldfish. The Unwelcome Surprise is her debut picture book.
If the item details above aren’t accurate or complete, we want to know about it.

The Elf on the Shelf Stand-n-Scoot