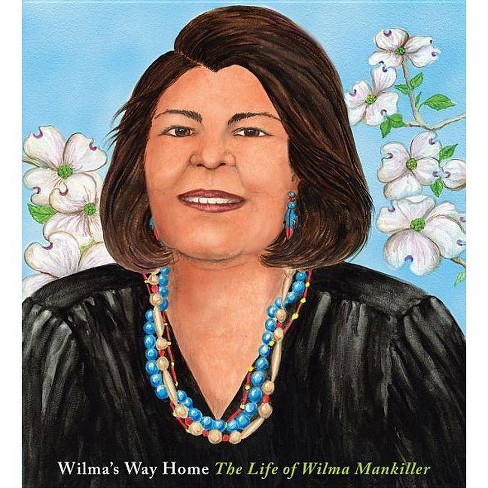 A striking picturebook biography of Wilma Mankiller, first female Cherokee Chief, this beautiful addition to the Big Words series will inspire future leaders to persevere in empathy and thoughtful problem-solving, reaching beyond themselves to help those around them. Full color.

This Big Words book from an award-winning author tells the courageous life story of Wilma Mankiller, the first female chief of the Cherokee Nation. As a child in Oklahoma, Wilma Mankiller experienced the Cherokee practice of Gadugi, helping each other, even when times were hard for everyone. But in 1956, the federal government uprooted her family and moved them to California, wrenching them from their home, friends, and traditions. Separated from her community and everything she knew, Wilma felt utterly lost until she found refuge in the Indian Center in San Francisco. There, she worked to build and develop the local Native community and championed Native political activists. She took her two children to visit tribal communities in the state, and as she introduced them to the traditions of their heritage, she felt a longing for home. Returning to Oklahoma with her daughters, Wilma took part in Cherokee government. Despite many obstacles, from resistance to female leadership to a life-threatening accident, Wilma's courageous dedication to serving her people led to her election as the first female chief of the Cherokee Nation. As leader and advocate, she reinvigorated her constituency by empowering them to identify and solve community problems. This beautiful addition to the Big Words series will inspire future leaders to persevere in empathy and thoughtful problem-solving, reaching beyond themselves to help those around them. Moving prose by award-winning author Doreen Rappaport is interwoven with Wilma's own words in this expertly researched biography, illustrated with warmth and vivacity by Linda Kukuk.

"An important read for all libraries, this work highlights a strong woman who left a vital message for future leaders."--School Library Journal

"Employing her familiar pattern of accessible narration punctuated by the subject's direct quotations, Rappaport emphasizes not only the hurdle of overcoming poverty in a society that devalues Native culture but also twentieth-century intra-Cherokee resistance to women in an elevated leadership role. Artwork is friendly and accessible, with vivid details of settings both natural and human-engineered. Source notes, a list of internet resources, author and illustrator notes, and a brief pronunciation guide are included."--The Bulletin of the Center for Children's Books

"Mankiller's own words, woven throughout the text, makes this book soar. Hearing her voice gives us a sense of the real woman. When Mankiller says, 'Women can help turn the world right side up, ' her sincerity resonates, and we can't help nodding at the wisdom of her words."--The New York Times

"Rappaport has produced a thoroughly researched biography enhanced by Mankiller's own words, and though it's heavy with text, readers should find that Choctaw artist Kukuk's detailed scratchboard and watercolor illustrations provide visual balance. The combined effect gives readers a sense of intimacy. A solid resource for a classroom or school library about a phenomenal Cherokee woman that feels a bit like flipping through a family photo album."--Kirkus Reviews

Doreen Rappaport has written numerous award-winning books for children, including Freedom Ship and The School Is Not White (both illustrated by Curtis James); Martin's Big Words: The Life of Dr. Martin Luther King, Jr., a Caldecott Honor Book and Coretta Scott King Honor Book illustrated by Bryan Collier; and John's Secret Dreams: The Life of John Lennon, also illustrated by Bryan Collier. A native of rural Oklahoma with Choctaw ancestry, Linda Kukuk specializes in both scratchboard art and watercolor painting. She is a member of the Oklahoma Art Guild and has received numerous awards for her work. Her art has been featured in the International Society of Scratchboard Artists Show, as well as the Festival of Arts in Oklahoma City, the OCCC Arts Festival Oklahoma, the Downtown Edmond Art Festival, the Red Earth Festival, the Cherokee Art Market in Tulsa, the Oklahoma Art Guild National Show, and the Kiamichi Owa-Chito Festival of the Forest Art Show. In addition to art, Linda enjoys travel, photography, gardening, cooking, and competing in 5K races. She invites you to visit her online at lindakukuk.com.
If the item details above aren’t accurate or complete, we want to know about it. Report incorrect product info.