Women and Other Monsters - by Jess Zimmerman (Hardcover) 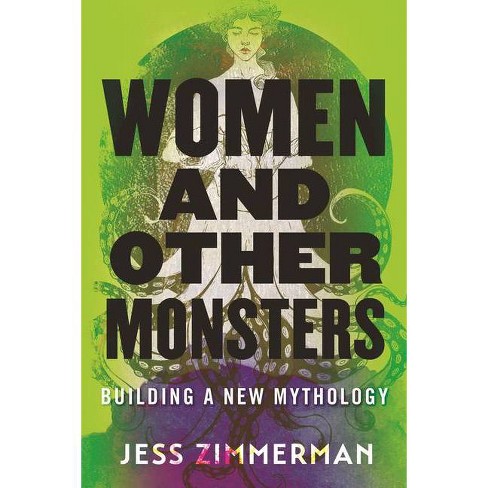 "This essay collection uses female monsters from Greek mythology to explore traits that women are taught to suppress, and encourage readers to embrace them instead"--

A fresh cultural analysis of female monsters from Greek mythology, and an invitation for all women to reclaim these stories as inspiration for a more wild, more "monstrous" version of feminism The folklore that has shaped our dominant culture teems with frightening female creatures. In our language, in our stories (many written by men), we underline the idea that women who step out of bounds--who are angry or greedy or ambitious, who are overtly sexual or not sexy enough--aren't just outside the norm. They're unnatural. Monstrous. But maybe, the traits we've been told make us dangerous and undesirable are actually our greatest strengths. Through fresh analysis of 11 female monsters, including Medusa, the Harpies, the Furies, and the Sphinx, Jess Zimmerman takes us on an illuminating feminist journey through mythology. She guides women (and others) to reexamine their relationships with traits like hunger, anger, ugliness, and ambition, teaching readers to embrace a new image of the female hero: one that looks a lot like a monster, with the agency and power to match. Often, women try to avoid the feeling of monstrousness, of being grotesquely alien, by tamping down those qualities that we're told fall outside the bounds of natural femininity. But monsters also get to do what other female characters--damsels, love interests, and even most heroines--do not. Monsters get to be complete, unrestrained, and larger than life. Today, women are becoming increasingly aware of the ways rules and socially constructed expectations have diminished us. After seeing where compliance gets us--harassed, shut out, and ruled by predators--women have never been more ready to become repellent, fearsome, and ravenous.

"A graceful stylist who casts a wide literary and geographical net, Zimmerman can make nearly anything interesting . . . . Nearly every page, however, brings fresh insights into age-old myths or tragicomic observations on 21st-century womanhood . . . . A sparkling and perceptive critique of ancient ideas that still hold women back."
--Kirkus Reviews, Starred Review "A fresh look at female-coded monsters from mythology offers insight about embracing characteristics that people fear."
--Shelf Awareness "An engaging parsing that addresses the ways that sexism and misogyny constrain women, a provocative weaving of the personal and the political."
--The Progressive "Many readers will feel the truth of this book in their bones as Zimmerman dissects the mythologies that still constrain women."
--Christian Science Monitor "Every one of these essays is muscular and dangerous, with a mouth full of teeth. Women and Other Monsters is sure to become a feminist classic."
--Carmen Maria Machado, author of In the Dream House "A thoughtful and deeply personal set of meditations on two subjects dear to my heart. Though as I read this, I couldn't help but feel that it had been written for me personally, I suspect that it was written for you too."
--Kelly Link, author of Get in Trouble "Women and Other Monsters reconsiders and spins anew myths that have long instructed and inspired us, detailing modern and longstanding terrors women face while illuminating the monstrous powers we may yet reclaim. I started to make a list of people I wanted to give this book to, then realized the answer was just 'everyone I know.' Jess Zimmerman's writing is always a gift, and this is a work of epic bravery and beauty, brimming with insights that slice to the bone."
--Nicole Chung, author of All You Can Ever Know "Jess Zimmerman's writing is always intimate and fierce, piercing and warm. I loved Women and Other Monsters--I ate it up, and it felt a little like it devoured me right back."
--Scaachi Koul, author of One Day We'll All Be Dead and None of This Will Matter "We are so long overdue for new mythologies about women and power. Jess Zimmerman's book is a pitch-perfect antidote to the sexist hash of our traditional stories."
--Soraya Chemaly, author of Rage Becomes Her

Jess Zimmerman is the editor in chief of Electric Literature. Her essays, fiction, opinion pieces, and prose poetry have appeared in publications including Vice, Slate, The Cut, the Washington Post, The Guardian, and the New Republic. She lives in Brooklyn. Connect with her @j_zimms.
If the item details above aren’t accurate or complete, we want to know about it. Report incorrect product info.