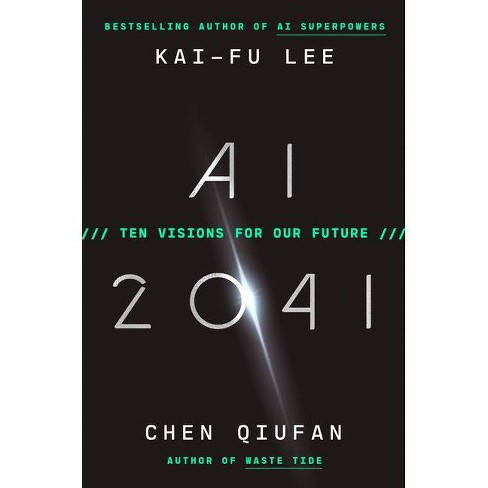 "In a ... blend of science and imagination, the former president of Google China and a leading writer of speculative fiction join forces to answer an urgent question: how will artificial intelligence change our world over the next twenty years? ... Many people know little about it apart from visions of dystopian robots or flying cars. Though the term has been around for half a century, it is only now, Kai-Fu Lee argues, that AI is poised to upend our society, just as the arrival of technologies like electricity and smart phones did before it"--

How will artificial intelligence change our world within twenty years? A WALL STREET JOURNAL, WASHINGTON POST, AND FINANCIAL TIMES BEST BOOK OF THE YEAR - "This inspired collaboration between a pioneering technologist and a visionary writer of science fiction offers bold and urgent insights."--Yann LeCun, winner of the Turing Award; chief AI scientist, Facebook "Amazingly entertaining . . . Lee and Chen take us on an immersive trip through the future. . . . Eye-opening."--Mark Cuban

AI will be the defining development of the twenty-first century. Within two decades, aspects of daily human life will be unrecognizable. AI will generate unprecedented wealth, revolutionize medicine and education through human-machine symbiosis, and create brand-new forms of communication and entertainment. In liberating us from routine work, however, AI will also challenge the organizing principles of our economic and social order. Meanwhile, AI will bring new risks in the form of autonomous weapons and smart technology that inherits human bias. AI is at a tipping point, and people need to wake up--both to AI's radiant pathways and its existential perils for life as we know it. In this provocative, utterly original work, Kai-Fu Lee, the former president of Google China and bestselling author of AI Superpowers, teams up with celebrated novelist Chen Qiufan to imagine our world in 2041 and how it will be shaped by AI. In ten gripping short stories, they introduce readers to an array of eye-opening 2041 settings, such as: - In San Francisco, the "job reallocation" industry emerges as deep learning AI causes widespread job displacement
- In Tokyo, a music fan is swept up in an immersive form of celebrity worship based on virtual reality and mixed reality
- In Mumbai, a teenage girl rebels when AI's crunching of big data gets in the way of romance
- In Seoul, virtual companions with perfected natural language processing (NLP) skills offer orphaned twins new ways to connect
- In Munich, a rogue scientist draws on quantum computing, computer vision and other AI technologies in a revenge plot that imperils the world By gazing toward a not-so-distant horizon, AI 2041 offers urgent insights into our collective future--while reminding readers that, ultimately, humankind remains the author of its destiny.

"An invaluable and entertaining vision of the future."--Ray Dalio, #1 New York Times bestselling author of Principles "To say that AI 2041 is enlightening and valuable, is to understate its significance. . . . AI 2041's scientific fiction gives us a way to open our eyes to what is actually going on all around us and where things are heading."--John Kao, Forbes "By blending imaginative storytelling and technical expertise, Kai-Fu Lee and Chen Qiufan bring to life a vision for AI that addresses both our curiosity and our fears. Read this captivating book to better understand how and when certain technologies are likely to mature, and what that could mean for all of us."--Satya Nadella, CEO, Microsoft "We have reached a momentous inflection point with AI, and no other book I've read captures it with such stunning insight and imagination. Instead of wondering whether to trust AI, we must think of it as a tool--one that we humans are in charge of shaping. Kai-Fu Lee's brilliant analysis in AI 2041 embodies this urgent mandate for humanity, while Chen Qiufan's gripping stories reveal how AI can become a bridge between previously unsolvable problems and a future of new possibilities."--Arianna Huffington, founder and CEO, Thrive Global "AI 2041 is the perfect fusion of science and fiction, illuminating the pervasive impact artificial intelligence will have in our lives and the challenges we face in shaping a techno-future that benefits all of humanity."--Marc Benioff, chair and CEO, Salesforce "Applying AI to business usually means learning the technology first and then figuring out how to apply it. AI 2041 allows readers to take the exact opposite approach. Through amazingly entertaining stories, Lee and Chen take us on an immersive trip through the future and then zoom out with exceptionally clear explanations of the technology at work. The result is an enjoyable and eye-opening book for those trying to understand how to apply AI."--Mark Cuban "Making predictions about the future of AI is not for the faint of heart. This inspired collaboration between a pioneering technologist and a visionary writer of science fiction offers bold and urgent insights into how these technologies may impact our lives."--Yann LeCun, winner of the Turing Award; chief AI scientist, Facebook "Are we fit for the strange new world we seem determined to create? What is clear is that imagination-defying change is upon us. Less clear is what these changes will mean for humankind. Kai-Fu Lee and Chen Qiufan's AI 2041 offers the most carefully and caringly considered visions of what is soon to come."--Bennett Miller, Academy Award-nominated director of Moneyball and Foxcatcher

Kai-Fu Lee is the CEO of Sinovation Ventures and New York Times bestselling author of AI Superpowers. Lee was formerly the president of Google China and a senior executive at Microsoft, SGI, and Apple. Co-chair of the Artificial Intelligence Council at the World Economic Forum, he has a bachelor's degree from Columbia and a PhD from Carnegie Mellon. Lee's numerous honors include being named to the Time 100 and Wired 25 Icons lists. He is based in Beijing. Chen Qiufan (aka Stanley Chan) is an award-winning author, translator, creative producer, and curator. He is the president of the World Chinese Science Fiction Association. His works include Waste Tide, Future Disease, and The Algorithms for Life. The founder of Thema Mundi, a content development studio, he lives in Beijing and Shanghai.
If the item details above aren’t accurate or complete, we want to know about it.

The Power of Myth - by Joseph Campbell & Bill Moyers (Paperback)

The Age of Dignity - by Ai-Jen Poo

How to Teach and Learn AI? - by Dong Hwa Kim (Paperback)