Assassins - (Left Behind) by Tim LaHaye & Jerry B Jenkins (Paperback) 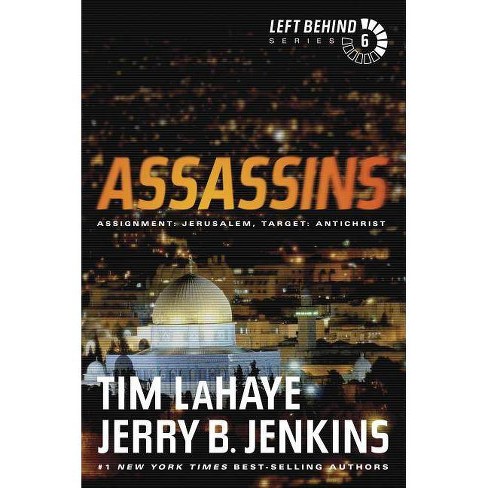 The members of the Tribulation Force face their most dangerous challenges. As international fugitives, they struggle to find supplies for safe houses around the world. In despair over so many lost lives, Rayford Steele and Buck Williams make plans to dethrone Nicolae Carpathia and expose him as the Antichrist.

Book 6 in the 12-book series that has sold over 63 million copies!

Assassins: Assignment: Jerusalem, Target: Antichrist
The members of the Tribulation Force face their most dangerous challenge. As international fugitives, they struggle to find supplies for safe houses around the world. In despair over so many lost lives, Rayford Steele and Buck Williams make plans to dethrone Nicolae Carpathia and expose his plan to become the ruler of the world. Many believers want him stopped, but who will fulfill Scripture and help bring about the Antichrist's death?

Pressure builds within the Tribulation Force's safe house as Rayford Steele's rage against Global Community leader Nicolae Carpathia nears the boiling point. He vows to dethrone Carpathia, plotting his assassination. As the Tribulation Force grieves one much-loved member and acquires a new convert, Rayford is haunted by suspicions that one of the team will betray the others to Carpathia's henchmen.

Will the Trib Force be brought down by fire, smoke, sulfur, and snakes--or by one of their own? Meanwhile, having escaped the slick Global Community-run media empire, Buck Williams churns out copies of The Truth, a cyberspace magazine that feeds millions of readers hungry for the Word of God, as enemy powers gather for a decadent celebration of the new world order.

Assassins is #6 in the phenomenal New York Times best-selling Left Behind series that rocked the publishing world and made millions think seriously about the future and their places in it.

With special features relating to current events and end-times prophecy.

"LaHaye and Jenkins keep the narrative lively."
-- "Booklist"
If the item details above aren’t accurate or complete, we want to know about it.