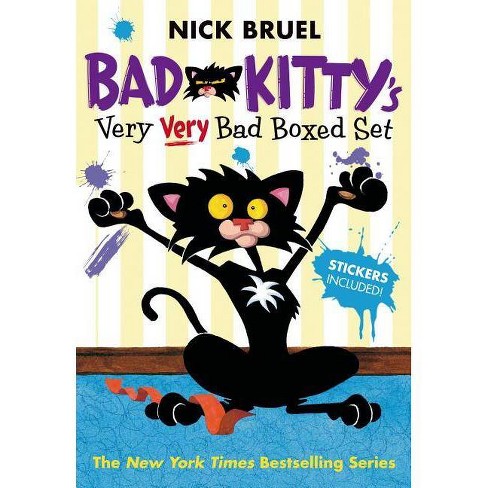 In Bad Kitty Meets the Baby, Kitty's owners are home with a big surprise for Kitty. But what is it? Kitty thinks it's a dog. The neighbor cats are convinced it's a cat. But we all know it's really a BABY! In Bad Kitty for President, it's time to elect a new president of the Neighborhood Cat Club. The results might surprise you. In Bad Kitty School Daze, Kitty and Puppy have been screaming, hissing, and fighting all over the house, and their owners have finally had enough. It's time for school . . . obedience school. Included in the Bad Kitty's Very Very Bad Boxed Set is a sheet of Bad Kitty stickers!

"Further proof that Bad Kitty can be good . . . especially in the eyes of her many fans." --Kirkus Reviews, on Bad Kitty Meets the Baby

"From primaries to debate skills, from the impact of the media to voter registration, Bruel walks young readers through all the steps in the US election process." --Booklist, on Bad Kitty for President "As usual it's Bad Kitty's personality that rules the day." --Publishers Weekly, on Bad Kitty School Daze

Nick Bruel is the author and illustrator of the phenomenally successful Bad Kitty series including the 2012 and 2013 CBC Children's Choice Book Award winners Bad Kitty Meets the Baby and Bad Kitty for President. Nick has also written and illustrated popular picture books including Who Is Melvin Bubble? and Bob and Otto. Nick lives with his wife and daughter in Westchester, New York.